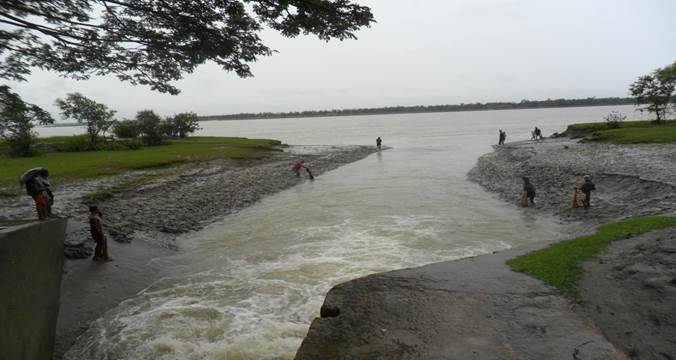 The coastal zone of Bangladesh is home to some of the world’s poorest and most food insecure people, and whose livelihoods depend primarily on agriculture. Key challenges to agricultural productivity include excessive flooding during the rainy season, soil salinity, lack of access to fresh water during the dry season, and severe cyclonic storms and tidal surges throughout the year. The coastal agriculture is dominated by single rainfed traditional aman rice, followed by pulses in few places.  Most of the lands remain fallow in the dry season due to lack of good quality water and soil salinity. The cropping intensity and productivity of this region is much lower than other parts of the country. The devastating cyclones, SIDR (2007) and AILA (2009) that hit the south coast caused huge loss of lives and property including standing crops. These led to increase in prices of food threatened food availability in the coastal regions.

BRAC, one of the largest Non-Governmental Organization (NGO) in the World had its permanent presence all over the Bangladesh including the remote coastal zone. After the devastating cyclone SIDR and AILA, BRAC had implemented the project entitled “Crop Intensification for Achieving Food Self Sufficiency in the Coastal Regions of Bangladesh” to rehabilitate the cyclone affected farming communities of southern Bangladesh with the most appropriate and productive agricultural technologies to ensure their food security through the adoption of year-round cropping practices by utilizing available resources they have in and around their farms.
On the basis of availability of the water resources, BRAC identified 15 cropping patterns in participation with the farming communities and local agricultural extension providers of the Government of Bangladesh (GoB). This was followed by participatory demonstration of these cropping patterns in block approach (a contiguous area of 10-20 ha of 50-60 farmers’ land) in 26 upazilas of the 7 coastal districts of the southern Bangladesh.
Key objectives of the project were:

through technological intervention and crop intensification.

The rehabilitation program was implemented by the Agriculture and Food Security Program (Box 1). BRAC adopted “system approach” rather than seasonal or crop specific approach for dissemination of appropriate improved agricultural technologies for the vulnerable coastal regions of Bangladesh.

BRAC AFSP has been working with the government of Bangladesh since its inception in achieving self sufficiency in food production, to ensure food security and to reduce hunger and malnutrition through  environmentally sustainable agricultural production. BRAC provides support to local farmers across the  country through agricultural research and development, quality seed production, distribution and marketing,  dissemination of proven agricultural technologies. BRAC has introduced high yielding and saline tolerant rice  variety, maize, sunflower and other vegetable as new crop in areas with low to moderate salinity as part of  the rehabilitation of cyclone SIDR and AILA victims. BRAC has demonstrated year round cropping system in  the coastal regions where the traditional farmers practice is low yielding single rice crop in the aman season.

Survey, selection of participants and group formation: For implementing this project, a benchmark survey was organized covering 18306 farmers. In each district 2-6 upazilas were chosen based on the severity of damage by the cyclones SIDR and AILA. In each upazila, 6-12 blocks having a land area of 1020 ha per block were selected for the rehabilitation program. The farmers in each block were treated as a group during the rehabilitation program. Initially 250 blocks were selected having about 3,373 ha of land that included 13,175 farmer participants. After one year, additional 272 blocks were selected having 15,131 farmer participants with a land area of about 4,157 ha to demonstrated the potentials of non-rice crops cultivation by utilizing residual soil moisture and limited fresh water stored in natural canals.

Development of training materials and training of trainers: Training materials for different crop production were developed highlighting the cultivation of rice and non-rice crops in the coastal regions of Bangladesh. Training materials covered aspects related to cultivation procedures, fertilizer and pesticide application focusing on integrated pest management, irrigation management highlighting the importance of the adoption of water saving technologies in rice cultivation. A three-day long training program on Crop Production and Management was organized in Barisal and Khulna. In total 164 BRAC staff received training to upgrade their knowledge and skill, who later acted as trainers of farmers.