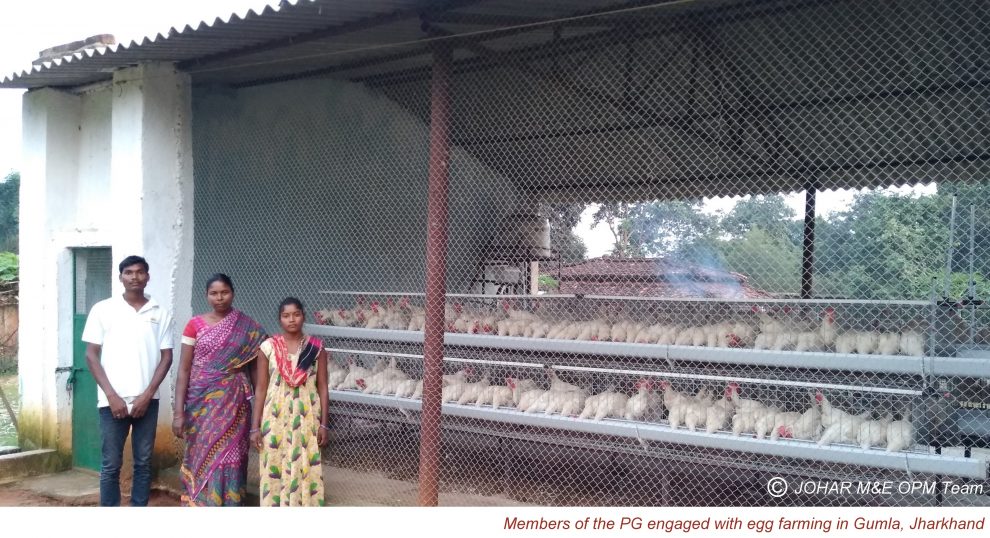 In this Good Practices Note, Phalasha Nagpal and Pratyush Ranjan Singh illustrate how a project supported women farmers in Jharkhand to enhance their income through layer farming.

Jharkhand, a state in eastern India, faces high levels of poverty with over three-quarters of its population residing in rural areas. Of these, nearly eighty percent are engaged in agriculture and allied activities. Research shows that the primary source of income is wage work and business, which mostly employs males. Meanwhile, there is a high degree of feminisation of agriculture which generates little to no marketable surplus. Given the significant female agrarian population, and structural barriers to their occupational mobility, diversification of livelihood opportunities holds the key to reducing rural distress.

Livestock rearing is the predominant allied activity in the agriculture sector that engages nearly four-fifths of rural households in Jharkhand. Within livestock, layer (egg) farming is one such activity which has the potential to be remunerative and allow these poor rural households to diversify their livelihood sources. It involves raising egg-laying poultry birds for the purpose of egg production on a commercial scale.

However, in Jharkhand, layer farming households are constrained by several challenges such as the high input costs, which includes access to healthy, egg-laying poultry birds, as well as feed and vaccinations. This is further compounded by their low per capita incomes coupled with poor access to credit. Against this background, the per household egg production tends to be low and fragmented. As a result, the egg farmers are unable to leverage the benefits of scale and tend to have both a low bargaining power in input and output markets, and inefficient market linkages. Given these challenges, there is a strong need to create enabling conditions through investments that ensure the financial feasibility and sustainability of layer farming.

The Jharkhand Opportunities for Harnessing Rural Growth (JOHAR) project supports layer farming through investments with the aim of making layer farming more remunerative and sustainable, and to transform rural livelihoods through diversification and intensification in agriculture and allied sectors. The main actors supporting this initiative and their roles are presented in Table 1 below.

Table 1: Actors and their roles

It builds upon the foundation of community-based institutions established under the National Rural Livelihoods Mission (NRLM) of the Government of India, and further mobilises women to form producer groups (PGs). In the case of layer farming, a producer group essentially refers to a group of women engaged in egg production, brought together to be able to leverage the benefits of collectivised production, marketing and sales. Using this collectivisation model, a co-operative under JOHAR provides input, market, finance and knowledge interventions to these households with the aim of doubling farmers’ incomes. With the support provided under the project, layer farming is currently providing income to 300 women in the villages of Gumla district in Jharkhand. 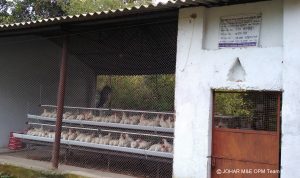 A layer farm supported by the JOHAR project

The layer cooperative in the Basiya block of Gumla district provides us with some valuable insights. The cooperative functions through a network of 300 female members that work together in a collectivisation-based model and group themselves as a producer group at the village level. Thereafter, these producer groups are federated into a cooperative that operates and manages all activities from the supply of inputs, procurement of eggs, and marketing of produce to its final sale. The cooperative is supported by an established federation at the state level. The federation is called the Jharkhand Women Self-Supporting Poultry Cooperative Federation Limited, a female farmer-owned enterprise that leverages a community-based model to build capacity for the growth of poultry and layer farming. 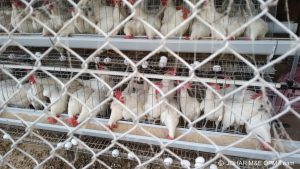 Data for the Basia layer co-operative shows that revenue earning per egg on average was INR 0.30. The same source indicates that in September 2019, each household sold 8,658 eggs in September 2019, with an average efficiency rate of 83 percent. A net income of INR 2,278 per month was earned after the repayment of loan and interest. 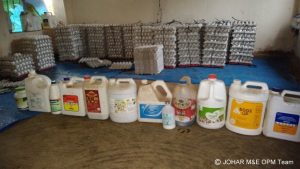 A rapid cost-benefit assessment of the Basia layer cooperative was undertaken to understand the feasibility of such investments. It was learnt that the initial shed construction to house the egg-producing birds, loan to the households, and working capital costs were largely funded by the JOHAR project. The break-up of costs is given in Table 2.

Table 2: A break-up of costs and revenue

Source: Based on data collected during the study and inputs from the JOHAR project team

The high mortality rate of pullets (layer birds) was one of the initial critical challenge to layer farming. The supervisors of the cooperative were enabled to bring down these mortality rates through technical training on related aspects. These included issues like how to identify the reason of mortality, how to administer injections and other technical aspects such as dosage of vaccines and medicine, feed ratio as per age of bird, cleanliness, sanitisation and fogging of sheds, shed fogging/cleaning/sanitization, feed consumption, supplements, as well as poultry diseases and other reasons behind low production.

The staff members of the cooperative had not received the desired level of technical training on areas such as layer rearing, management of community, and goods and services tax at the co-operative level. These findings were shared with the stakeholders and potential investors in the layer farming model for necessary action.

The period for the repayment of loan (principal and interest) by member households took place over a long time period (requiring up to a decade). Investments in such a model must, therefore, take into consideration the time cost of investment recovery.

We gained some interesting and valuable insights from the assessment.

First, the high annual rate of return on investment from the layer cooperative model indicates profitability both at the household level as well as at the cooperative level. This is quite promising in terms of consideration for scaling up and emulating the model in layer farming, and more generally, for other livelihood interventions.

Second, the collectivisation-based design of the model enables households to leverage economies of scale and at the same time overcome market constraints of demand and supply.

Finally, from a social policy perspective, the model holds promise in enhancing rural livelihoods by encouraging social welfare and realising the pathways for increasing farmer incomes.

The JOHAR project is jointly supported by the Jharkhand State Livelihoods Promotion Society, Government of Jharkhand, the World Bank, and Oxford Policy Management.

Phalasha Nagpal, Oxford Policy Management, works in international development with a focus on health, gender and agriculture as a social policy and MLE (monitoring, learning and evaluation) researcher. She has previously worked at the Economic Advisory Council to the Prime Minister, Government of India. She has a Master of Science degree in economics and finance from the University of Durham (phalasha.nagpal@opml.co.uk).

Pratyush Ranjan Singh, World Bank, works in the field of rural livelihoods and natural resource management in South Asia. He has worked with national and International non-government organisations for over a decade. He was awarded the Ford Foundation Fellowship in 2010 and graduated from Cornell University (psingh22@worldbank.org).

The views expressed here are personal.