To overcome these constraints, the ICAR-Krishi Vigyan Kendra (KVK)at Namakkal, working under the administrative control of the Tamil Nadu Veterinary and Animal Sciences University, has introduced a Public Private Partnership (PPP) project for fodder seed production in 2011 to make green fodder seeds available to livestock farmers. Accordingly, a memorandum was signed between the farmer producer and the KVK for growing fodder for quality seed production. This good practice note narrates the mode of operation, guaranteed buy back and payment by KVK, employment and income generated by farmers and the challenges in the last eight years.

The fodder seed production was initiated at KVK in 2011 to supply seeds to the State Department of Animal Husbandry, Tamil Nadu, under State Fodder Development Scheme.

On farm trials, demonstrations and trainings

To start with, the following varieties of fodder were tested initially in on-farm trials and frontline demonstrations in the district.

The yield parameters were studied. Based on the results, on- and off-campus training programmes were conducted to educate farmers about cultivation of green fodder for fodder as well as seed production. The successful outcome of these programmes were shared with other farmers through different activities conducted by KVK, Namakkal.

With increasing awareness about fodder seed production, many farmers got interested in it and they volunteered to initiate the activity. Based on their land availability, irrigation facilities, soil type and their interest, the KVK selected farmers who desired to grow fodder crops like multi-cut fodder sorghum Cofs 29, Cofs 31, Desmanthus, fodder cowpea, African tall maize, sesbania, cenchrus, stylo, Lucerne and subabul and grass type fodder crops like Co4 and guinea grass for seeds/setts. KVK staff also visited the farmer’s fields before the farmers start cultivating fodder.

The KVK signed a Memorandum of Understanding (MoU) with the farmers. The respective role of KVK and the farmers, area under cultivation, type of fodder to be cultivated, the quality of seeds to be given and the procurement price are mentioned in the MoU. Training programmes on green fodder cultivation and seed production were conducted for the selected farmers and foundation seeds of different fodder varieties purchased from Tamil Nadu Agriculture University (TNAU) were supplied to these farmers.

Periodical visits were made by the KVK scientists to the fodder fields to monitor plant growth, seed setting, harvesting and processing, and to offer technical guidance to seed producers. 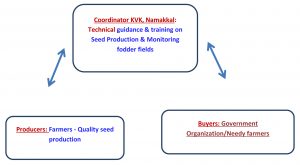 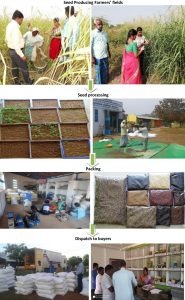 The farmers started to produce fodder seeds since 2011. The enrollment was low initially and the quantity supplied was only around 1500 kg (2011) and 6500 kg (2012). The scheme became more popular by 2012 when the enrollment increased and the production rose to 39 tons (Table 1). Later, the production was streamlined by allotting specific varieties to farmers and depending on the demand created by different schemes and institutions that procured the fodder seeds. On average, 20 – 25 tons of seeds per annum was procured by KVK from the seed producers. 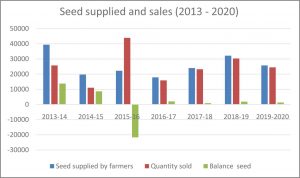 From 2011 to March 2020, about 1,86,221 kg fodder seeds were procured from 18–61 farmers every year and 1,51,248 farmers benefitted (Table 1). Of the total revenue generated, 15% has been kept as margin money by the KVK to meet expenditure for packing, transport, labour charge and other contingencies in the scheme.

The sale price is fixed as per TNAU rates. The quantity of seed procured is packed and dispatched to different places as per requests made within a week from the receipt of indent. Details related to the procurement and sale price are presented in Table 2.

Among the different fodder seeds, Cofs 29/co31 was produced by 116 farmers and the average yield is 355kg/acre. So they could make Rs. 1.23 lakh/acre when they cultivated fodder sorghum variety Cofs 29 under rain-fed condition. (Table3). This might be due to the ease of cultivation and processing and its relatively better performance under rainfed condition. The cost/kg is high for Lucerne and Desmanthus, but the climatic condition was found unsuitable for cultivating Lucerne. The yield and the rate per acre are the deciding factors for farmers to choose a variety for seed production. Farmers shied away from cenchrus and stylo owing to constraints in cultivation and collection of seeds.

Till date, 204 farmers were enrolled under this MoU and around 50–60 farmers supply seeds every year based on the rainfall and availability of water. Totally, 376 acres are being maintained for fodder seed production by these farmers out of a total 1199 acres. The farmers also use the fodder to feed their animals alongside production of seeds.

Though the total enrolment was made for 204 farmers, 49 farmers couldn’t supply the seeds and left the scheme. One hundred and three farmers supply the seeds under rainfed condition if rainfall is good.

By converting the land for fodder seed production, majority of the seed producing farmers felt that the income generation through this activity is twice more than income produced in other agricultural crops. Majority of the farmers maintain multi cut variety sorghum in rainfed condition and it yields 300kg seeds approximately in one acre that fetches Rs.1,02,000 whereas in irrigated conditions the farmers get 500-600 kgs and receiveRs.2,04,000 from one acre.

Fodder production fetches more profit to farmers which motivates them to continue the operation. Some farmers produce all the four type of fodder seeds (grass, grain, leguminous and tree fodder). Producing seeds not only made them successful, but they become self sustained in green fodder production, which could then be fed to their animals that results in reduced feeding and high production. Also, they create awareness among other farmers about green fodder production and the benefits of feeding these to dairy cattle and small ruminants.

The scheme addressed the problems that the farming sector today faces. Firstly, the availability of green fodder for animals, secondly, the shortage of fodder seeds, and thirdly, the lack of good income from farming.

Shrinking grazing lands have forced farmers to purchase more feed for animals, amounting to about 60% of their production costs.

Livestock plays a major role even in drought situation to support the livelihood of farmers. In that situation, if a farmer cultivates green fodder on a piece of land, it helps to rear animals in a more profitable manner.

Apart from farmers in Namakkal, farmers from other districts including Erode, Dharmapuri, Thoothhukudi, Krishnagiri, Trichy, Dindigul and Karurin Tamil Nadu have also become members of the scheme.

Though the scheme addressed the problem of getting quality fodder seeds, there are certain challenges to be addressed in the scheme.

Lack of production in drought/poor rainfall conditions: The number of farmers enrolled for Cofs 29/31 seed production under rain-fed condition is high and it is a fact that Namakkal is a drought prone district. When the seasonal rain is poor or fails or when there were unseasonal rains, farmers couldn’t harvest seeds due to crop failure. During that time, the KVK couldn’t get needed quantity of seeds from the farmers to meet the demand.

Stagnation of seeds without sales: When rainfall is good and timely, seed arrival will be surplus. Since farmers are under an MoU, seeds can’t be denied. Sometimes, seed availability will be more than the demand. In such situations, seeds spoiled and payment to producers resulted in loss to the KVK.

Short shelf life of seeds: Certain seeds like African Tall maize and fodder cowpea have short shelf life and easily spoil even when treated. The seeds can’t be kept for more than three months from the date of purchase. If no demand is raised and seeds get old, it can’t be sold. But, payment has to be made to farmer producers.

To address these challenges,

The number of farmers are increasing only for certain fodder varieties leading to more supply than demand. Enrollment is low for cenchrus, stylo, sesbania and Lucerne seed production. There is a need to involve more farmers to grow these crops and in their seed production. In many states, multi-type green fodder production has not been taken up on a large scale. Seed sales may be promoted in many of these states by giving wider publicity so that more seed producers will be benefitted.

Scarcity of fodder remains as an important issue during summer. To overcome this, silage production may also be taken up in a commercial manner. It is hoped that this will pave the way for rearing livestock in a more profitable manner. Since farmers depend only on dry fodder during summer season, community silage making with small bale silage is a promising option to ensure quality fodder to livestock.

Acknowledgements:  The authors acknowledge the guidance rendered by Tamil Nadu Veterinary and Animal Sciences University, ATARI, Bengaluru till 2017 and ATARI Hyderabad from 2017 till date to take up the PPP fodder seed production activity in a successful manner.