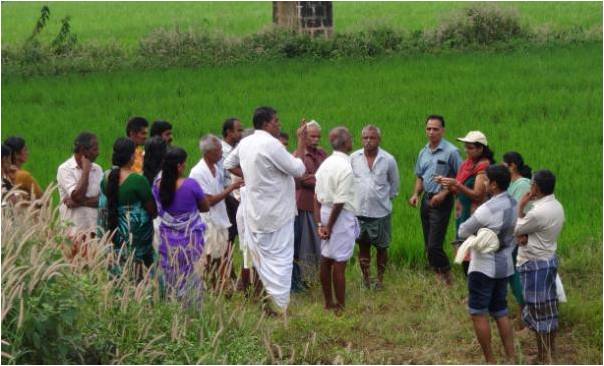 Integrated pest management (IPM), which evolved in the 1970s is a concept that unifies different pest management techniques. The goal of IPM is to achieve economic crop production in an eco-friendly manner. The practice of IPM requires sensitive intervention and substantial collaboration between farmers, extension personnel and plant protection professionals. Dr Madhu Subramanian, an entomologist with Kerala Agricultural University, shares his experience in promoting IPM in paddy in Kerala.

Kerala, the southernmost state of India, is known as ‘Gods own country’ for its natural splendour and scenic beauty. A characteristic feature of the state’s lush green landscape, until not so long ago, was the verdant paddy fields that stretched as far as eyes could see. However, over the last four decades the rice fields have been disappearing at an alarming rate and presently occupies a mere 30 per cent of the 7.2 lakh ha they covered in 1970s. A host of factors such as increasing cost of inputs, labour scarcity and price fluctuations have all contributed to the present debacle.  The Palakkad district remains one of the last bastions for paddy in Kerala. However, here too, rice cultivation is plagued by pest and disease problems leading to increasing cost of cultivation and reduced yields.

The Vadakkenchery Panchayat of the district has traditionally grown paddy as the principal crop. Around 1500 farmers grow rice in an area of 718 ha, predominantly during the second crop season (September-January). High yielding varieties such as Jyothi and Uma have replaced most of the earlier varieties. The cost of cultivation is high, owing to the extensive use of chemical fertilisers and pesticides. Insecticides like quinalphos, chlorpyrifos, lamda cyhalothrin, and cypermethrin are used indiscriminately regardless of pest incidence. Such unscientific use of plant protection chemicals have rendered the cultivation non-profitable and over the course of time pushed farmers into a vicious debt trap.

It was in such a backdrop that the Vadakkencherry Krishibhavan (under the State
Department of Agriculture), in collaboration with the All India Co-ordinated Research
Project on Biological Control of Crop Pests & Weeds (AICRP on BCCP &W) under Kerala Agricultural University and Agricultural Technology Management Agency (ATMA of the Department of Agriculture), launched an initiative in 2015-16 for popularisation of IPM for rice. An area of 10 ha at Anakkappara padasekharam was selected as the site for the intervention.

The primary objective of the programme was to reduce the consumption of chemical pesticides through adoption of sustainable IPM practices. The technology package included the following:

Twenty two farmers of the Padasekharam covering a contiguous area of 10 ha were identified and were formed into a Farmer Field School (FFS) after ascertaining their willingness to follow BIPM (Bio-intensive integrated pest management) practices.

The Farmer Field School met at 8.30 am every Monday morning, along with the
Krishibhavan team as well as AICRP scientists. The entire group then went through the fields

An FFS Session in Progress
to assess the crop situation. The information gathered from the field was shared and discussed to decide on the future course of action. Such critical analyses of the field situation every week helped the famers take appropriate decision on management practices.

Integrated pest management relies heavily on information regarding the weather, the crop phenology, the pest and natural enemy populations etc., for decision making. Such information was collected througha continuous process of information gathering from fixed plots as well as through roving surveys.