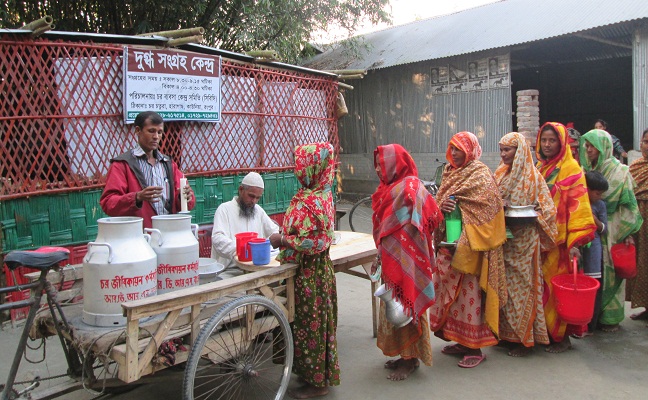 An integrated approach for the development of milk market helps poor communities living in the char lands of Bangladesh to enhance their income. The approach combines technical, organisational and marketing interventions. Md Mamunur
Rashid, Md. Shafiqur Rahman and Khandaker Farzan Ahmed
participated in this initiative and they share their experiences here.

There are many opportunities at char lands (sand and silt landmass) in Bangladesh (Box 1) for milk production mainly because of the available grazing land. Most of the char dwellers are involved with cattle rearing. Many rich people of mainland invest money for cow rearing in char on asharing basis with the poor char dwellers. Every day huge volume of milk is produced in char areas but the marketing facility is very poor. Therefore, char dwellers fail to get a reasonable price for the milk they produce.

Box 1: Char
The riverine sand and silt landmasses known as char in Bengali are home to over 5 million people in Bangladesh. The chars – some midstream islands and others attached to the mainland – are created from river sediments and are in a constant state of formation and erosion. Emerging chars create new areas for settlement and cultivation, an important resource in a land scarce country such as Bangladesh.  However, a constant threat of riverbank erosion and flooding, combined with a lack of physical infrastructure, government services and employment opportunities in the chars, makes for a vulnerable, difficult and fragile way of life.
The chars in the north-west are located in some of the most isolated and impoverished areas in the country. People on the chars are heavily reliant on low-paid and unpredictable day labour for their livelihoods. They are typically food insecure and suffer from under-nutrition. People living here are therefore highly vulnerable to environmental shocks that can have devastating effects on their livelihoods.

Commercial production and marketing of milk is still absent in char lands because of the distance from the mainland market and the cost for quick transportation. Regular milk marketing channels do not exist and milk producers depend on the local milk collectors at char. In some cases, milk collectors from the mainland, who visit char sporadically, collect milk at low prices and often on credit. Often, producers sell their produceearlier to the local collectors to secure some value. As a result, the milk has not much economic value in the char and the producers do not receive a fair price.

Most of the cattle are local breeds and the yield is very poor. The management (labour, time) of cows, whether local or cross bred is almost the same but there is a huge difference in output. For instance, the average milk production of crossbred cow is 10-12 litres/day where as from a local breed it is 2-3 litres/day.
Cattle feed is unavailable in the chars during floods and both the cattle population and the milk production reduces during this period. Many animals receive maintenance or below maintenance levels of nutrition resulting in low levels of production.  Addition of even small amount of higher quality feed can have much larger effect on production. Use of fodder as cattle feed can enhance milk production as well as fat percentage of milk. Char farmers can easily cultivate fodder specially Jambu for feeding their own cattle as well as for commercial purposes. However, this hasn’t been explored so far.
To overcome these constraints, Chars Livelihoods Programme (CLP) Box-2 was launched. Milk Market Development Project (MMDP) is a component of CLP and it was implemented from February 2013-February 2016. The objective was to increase the milk production from the chars and potentially improve the market system so that it becomes a lucrative activity for poor households in chars. RDRS implemented part of this project in Rangpur, Kurigramand Lalmonirhat districts with 950 milk producers of 38 Milk Business Groups (MBG).