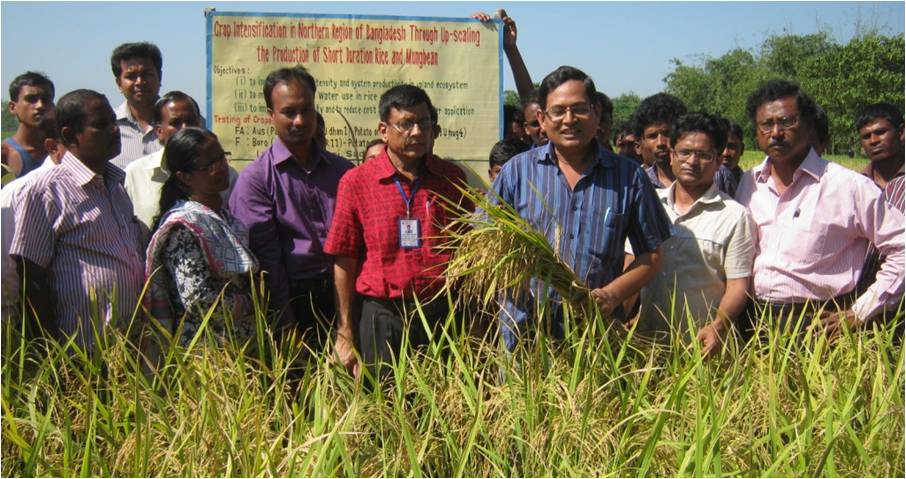 Food insecurity among the poorer segment of rural population during September-October and in April-May is common in northern Bangladesh. This is primarily due to unemployment during this period and many poor families face almost near famine situation during these periods (RDRS, 2006). It happens as long duration rice varieties (Swarna, BR 11 and local) dominate during aman season. These varieties require nearly 150 days to harvest and farmers have to wait until mid-November for agricultural job as well as their food (Hossain, 2004; Haque, 2010).    (Rice is cultivated in Bangladesh throughout the year as Aus, Aman or Boro. Aman (broadcast and transplanted) is generally cultivated in December-January, Boro in March-May and Aus in July-August cropping seasons).

Very recently, aman rice-potato-boro rice cropping pattern is rapidly becoming popular in northern Bangladesh due to good market of potato as well as good harvest of rice (RDRS, 2010). This cropping pattern however, might not be economical and environmentally safe as it requires withdrawal of huge quantity of ground water to cultivate boro after the harvest of potato in sandy loam soils. Rice production requires about 4000 litres of water for producing a kilogram of rice; but this precious natural resource is not unlimited. About 15-20 million ha of rice cultivation in Asia might be impacted by water scarcity because of climate change and increased consumption of water for agricultural use (IRRI, 2010).

Food insecurity and unemployment of farm workers in September-October can be mitigated by up-scaling the production of short duration aman rice (Var. BUdhan 1, BRRI Dhan 56, BINA Dhan 7) as it can be harvested by October. It is evident and popularized in some areas of northern Bangladesh through the preliminary research and development works done with the financial assistance of KGF (Krishi Gobeshona Foundation) from May 2009 – April 2011. Similar changes in other parts of northern region will not only ensure food security but also enhance system productivity as it facilitates timely planting of winter potato or wheat after the rice harvest (Haque, 2010). However, this technology requires further testing and validation under specific micro-environments.

RDRS Bangladesh in collaboration with Bangabandhu Sheikh Mujibur Rahman Agricultural University (BSMRAU) took up the alternate cropping pattern initiative with financial assistance of KGF. The initiative was launched under the project “Crop intensification in northern region of Bangladesh through up-scaling the production of short duration rice and mungbean” in July 2011.

The activities were implemented in eight northwest districts namely Rangpur, Gaibandha, Kurigram, Lalmonirhat, Nilphamari, Dinajpur, Thakurgaon and Panchagarh of Rangpur division.  As the initiative targeted 400 farmers, 50 farmers from each district were selected from FFS in group discussion with the help of Farmers Forum of Federation (FFF).