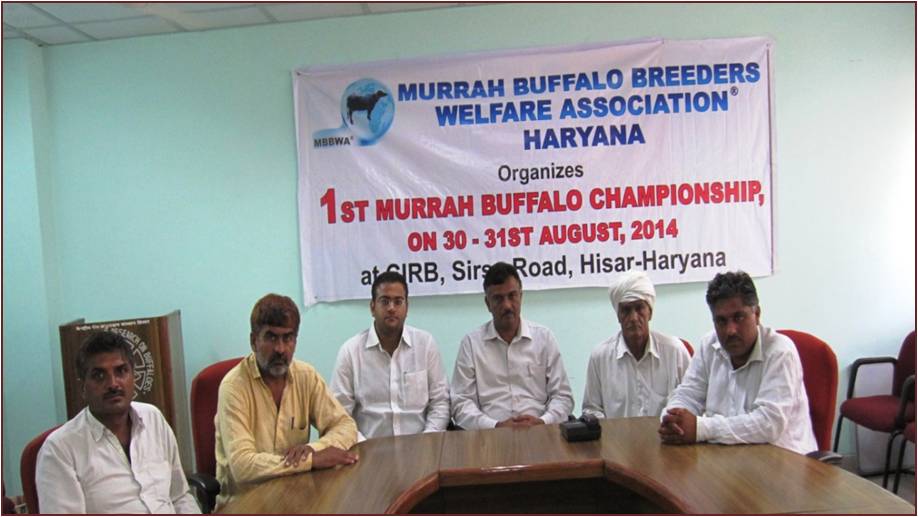 Buffalo Breeders Association may be one of the innovative approaches for promotion of improved buffalo husbandry practices. Dr. V. B. Dixit, Dr. Hema Tripathi, A. Duhan and Dr. I.
J. Singh share their experiences in the functioning of Murrah
Buffalo Breeders’ Welfare Association (MBBWA).
CONTEXT
India has number of institutions generating and transmitting technologies. We have a number of agencies to deliver technologies. However, at the farmers’ level, there is no institution that receives and takes advantage of all these technologies. Therefore, there is a need to create right institution at the farmers’ level. The institution may be a commodity-based group of farmers. These are associations where technology is picked up, absorbed and shared. In the recent years, the Ministry of Agriculture, Government of India, has identified Farmer Producer Organizations (FPO) registered under the special provisions of the companies act, 1956, as the most appropriate institutional forum to mobilize farmers and build their capacity to collectively leverage their production and marketing strength (MoA, 2013). According to Haryana Kisan Ayog’s Proceedings (GoH, 2013) on “Opportunity for Youth in Agriculture”, normally one person gains a full-time employment by keeping 2-3 milch animals. To further improve income and livelihood opportunities in buffalo husbandry at a rapid pace, the role of producer organization is very significant. The Murrah Buffalo Breeders’ Welfare Association was constituted in 2013, keeping the above facts in view.
Office bearers of Association with Director, ICAR-CIRB: Meeting of office bearers of the Association in progress
IMPORTANCE OF BUFFALOES
India has over 111.3 million buffaloes constituting about 57.3 per cent of the world population. Although buffaloes are less in population when compared with the cattle (199.08 million), buffaloes currently produce 62.35 million tonnes of milk contributing to 51.2 per cent of the total milk (FAO, 2012). Besides milk, 1.525 million tonnes of meat is produced from buffaloes. Buffalo draft power also accounts for about 10 per cent of the total draft power contributed by the work animals in the country. In addition to milk, meat and draft, buffaloes also produce 0.52 million tonnes of skin and hides in the country.

In Haryana, buffaloes are the backbone of rural economy. Haryana holds a special place in the field of milk production and it is truly known as the ‘Milk Pail’ of the country. The state is proud to be the home-tract of one of the best buffalo breeds of the world, i.e., ‘Murrah’. Buffalo has also been recognized to be the animal of the 21st Century. Milk production in the state is 54.72 lakh metric tonnes. 80 per cent of the milk is contributed by buffaloes. The per head milk availability in the state is 660 gm per day which is 2nd highest and next to Punjab. Farmers also prefer to buy Murrah semen because Murrah buffaloes are capable of giving 4,000 litres of milk per lactation as against the 2,000-2,200 litres of milk given by a mixed breed buffaloes.
The state has a vast potential of self-employment generation in the sector of Animal Husbandry and Dairying as the farmers can gain full-time employment through this enterprise. Thus, buffalo husbandry plays a great role in the livelihood security of the farmers particularly the small holders who maintain 23 buffaloes in the mixed farming system. This sector can be more profitable if improved buffalo husbandry practices are disseminated timely not only by the Government institutions but also by involving the other agencies and introducing innovative extension methodologies. Buffalo breeders’ welfare association is one of the efforts in this direction.
MURRAH BUFFALO BREEDERS’ WELFARE ASSOCIATION
Formation

Central Institute for Research on Buffaloes organizes Buffalo Mela every year on its foundation day. It is one of the most important events in which farmers owning best buffaloes and bulls participate with lot of zeal and fervour as the event has become extremely popular in Haryana. Thus, all those farmers who participate every year possessing best Murrah Buffalo germplasm were identified and were called for a meeting at the premises of ICAR-CIRB.

More than 70 farmers attended the meeting on 21 June 2013 where they were motivated to have an association for their welfare. After the meeting, farmers deliberated amongst themselves and the general body nominated ad-hoc executive committee having President, Vice-President, Secretary and Treasurer for a period of one year. The Association was registered as Murrah Buffalo Breeders’ Welfare Association (MBBWA) in January 2014. A Constitution of Association was prepared and the membership fee was decided. The objectives of MBBWA are given in Box 1.