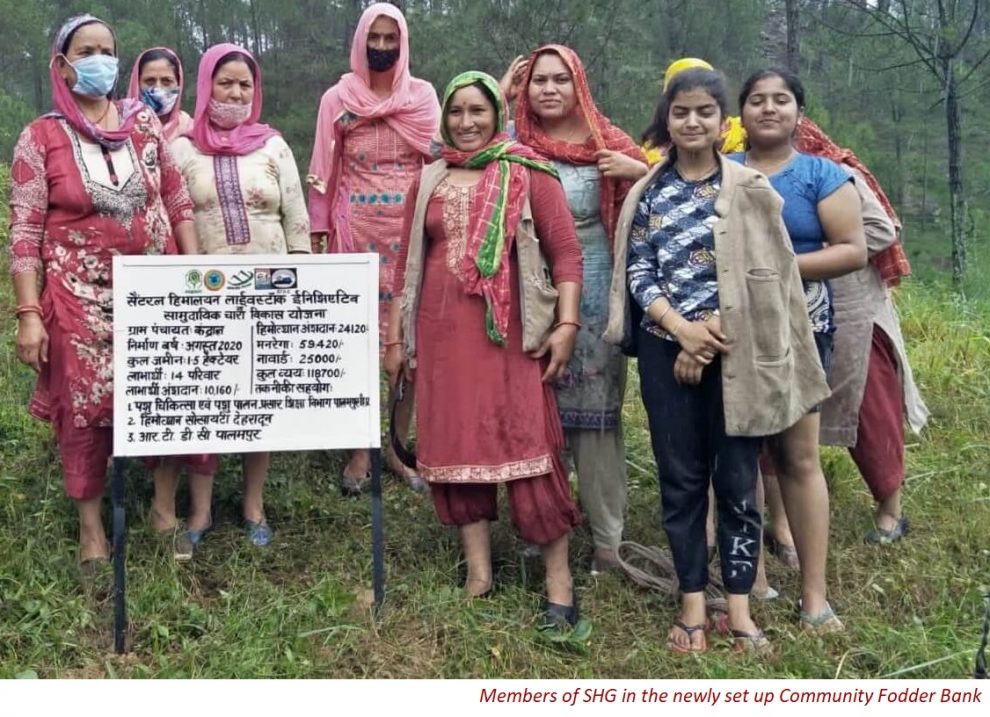 In this Good Practice Note, Dr Devesh Thakur and Mr Amit Upmanyu share their experience on setting up community fodder interventions in Himachal Pradesh through community mobilization, and by forging partnerships among varied stakeholders. The note also showcases the model approach for setting up low-cost community fodder banks through a convergence mode.

Adequate availability of feed and fodder is critical for sustainable growth and development of the livestock sector. India faces a net deficit of 63% in green fodder, 24% in dry crop residues, and 64% in feeds. Projections show a further increase in demand by 2025 due to changing feeding patterns and more dietary reliance on livestock and its products (Kumar et al. 2012). Poor feeding resources have resulted in sub-optimal performance of livestock production in India as animals suffer from poor health and productivity. The deficit also causes an exorbitant increase in prices of feed and crop residues in many parts of the country (Owen et al. 2012).

Green fodder cultivation provides nutritious feed and helps to cut down the feeding cost which forms 65-70% of the cost of livestock rearing (GOI 2012). Unfortunately, the area cultivated for fodder cannot be increased due to more competition between various land uses for cultivable land (Kumar et. al. 2012). Fodder scarcity also has significantly contributed to greater drudgery for women in farming (Box 1). Community Fodder Banks are a good alternate strategy to augment fodder production. In such fodder banks, a group of farmers come together to raise multiple fodder crops consisting of trees, grasses and legumes largely in wastelands/non-arable lands (Venugoplan et al. 2012). Unfortunately, the popularization of such extension initiatives have remained woefully weak across the country and very few initiatives have been undertaken in this regard.

During the last two years (2018–2020) the two institutions – DGCNCOVAS, CSKHPKV and Himmotthan – had collaborated with each other in implementing field activities. Scientists of CSKHPKV had organised trainings for farmers and animal health camps in collaboration with Himmotthan in their intervention villages. Himmotthan had hosted the trainees and students from CSKHPKV for field exposures. To take the common mandate of livestock development forward, a project on ‘Community Fodder Interventions for Dairy Development’ was conceptualized and designed by DGCNCOVAS scientists of CSKHPKV Palampur and Himmotthan. This project was sanctioned by NABARD for a modest amount of Rs 24.73 lakhs for three years and it had the objective of community fodder interventions in Kangra district, Himachal Pradesh. The project involved community participation and training in fodder production and animal health. The initiative combined the scientific expertise of the college and the university with the community mobilization experience and Himmotthan’s presence among farming communities by entering into a formal partnership among these actors so as to implement community fodder interventions in the region.

The project is being implemented in two blocks of Baijnath and Rait of Kangra district in Himachal Pradesh. In these two blocks, Gram Panchayats of Ghorpith, Kandral, Beth Jhikli, Madhonagar in Baijnath block and Gram Panchayats of Bhaled, Kanol, Drini and Rirkamar of Rait block have been selected. These areas have been selected as every household in the village owns dairy animals. Women in the region form the major workforce in dairy farming as men opt for non-farm jobs. Himmotthan has been working in these two locations for two years and have organised around 80 SHGs in the villages which are trained on institutional aspects, accounts and book keeping.  They follow practices such as monthly meeting, monthly saving, accounting and book keeping and linking with bank.  Under the project SHGs are trained and facilitated by project staff of the Department of Veterinary & Animal Husbandry extension education and Himmothan Society on fodder promotion and overall livestock management practices.

In the meetings facilitated by project staff of the Department of Veterinary & AH Extension Education and Himmothan Society, SHG members are instructed on the activities to be undertaken in the project and the process of fodder plantations. Besides, meetings with local Gram Panchayat representatives are conducted to explain the concept and sensitise them towards mobilisation of resources on the proposed fodder plantations. SHG members and local farmers present it in the Gram Sabha meetings and a resolution is passed at Gram Sabha for allocation of site and funds under MGNREGA for the activity.

The open lands around farmers’ homesteads such as wastelands/common property resources (CPRs)/uncultivated lands are selected. Selection is done by conducting group meetings with SHG members and local Gram Panchayats. This is followed by site visits of the project staff, officials from Himmothan Society, and local representatives. Once the site is finalised, the resolution to utilise funds under MNREGA is passed by Gram Panchayats. The SHG beneficiaries also contribute their minimal share for site development in the form of voluntary labour and fencing poles. 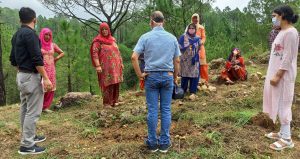 Since most of the land selected is either wastelands infested with weeds or rough terrain, cleaning of the area is the first step. After cleaning the area, pre-plantation work is carried out on the plot which includes staggered contour trenches for water conservation and grass plantation, pit digging for plants and fencing, gully plugs, recharge pits and compost pits. These measures reduce erosion of top soil, increase the moisture regime of the plots by increasing water infiltration and thus increase soil fertility. 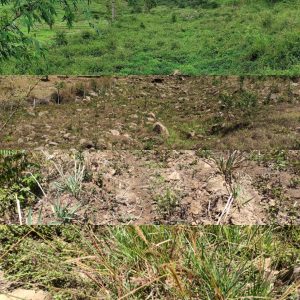 From a weed infested area to a community fodder bank

Once the pre-plantation activities are complete the entire plot is fenced using poles and barbed wires. Since most of these plots are common land and waste lands, it is extremely important to protect the area from cattle grazing, theft or any other damage. 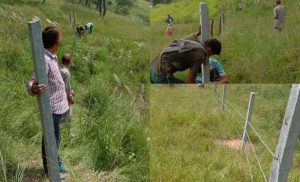 Plantation work was carried out in the rainy season (July-August) as climatic conditions are better suited for adaptation and growth. The following varieties of fodder grasses were planted: 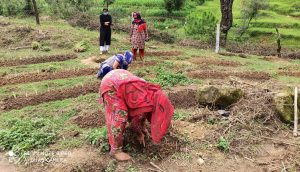 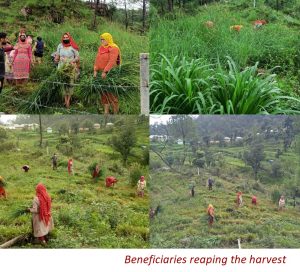 Out of these, the first two fodder species grew well in the interventions made (Box 2). Besides these, common fodder/medicinal tree plants such as Mulberry (Morus alba), Indian gooseberry (Phyllanthus emblica), Jaman (Syzygium cumini), Kachnar (Bauhinia variegate), and Oak (Quercus) have also been planted. Based on the number of trenches created in the plot, 10-12 quintals of fodder roots were planted in each community fodder bank. A total of 40-45 quintals of fodder roots were planted. The labour work for plantation and pre-plantation activities was done under MGNREGA.

Protection and management of fodder plots is very crucial for the success of this entire intervention. Since each plot is assigned to one or more SHG groups, they are responsible for the protection of the plot from cattle grazing, damage of plants and fence, and theft of grass. The area of each plot is subdivided equally among the group members for ease of management and protection. Each group’s members are responsible for weeding, intercultural operations and manuring of their portion of the plot. During the harvest every member will get the grass from their part of the plot.

The SHG members have harvested improved fodder crops two times up until July 31, 2021, from the plot established during July-August 2020. The detailed fodder production in one year appears sufficient as the area had negligible fodder production before intervention. The estimated fodder production from one community fodder bank in Ghorpith village is presented in Table 1.

To create local availability of superior fodder grass of Napier Bajra, Setaria and common fodder trees such as Morus, village fodder nurseries have also been set up. Two farmers have come forward to set up such nurseries though widespread promotion of nurseries has remained challenging due to the small landholding size of farmers.

Besides establishing community fodder banks, small group trainings have been regularly conducted on identified priority areas. These training programmes and demonstrations have helped farmers to gain knowledge on scientific feeding of livestock. In one year 20 small group trainings have been conducted in the vicinity of households of farmwomen. Most of these trainings involve method demonstrations on feed formulation, proven Ayurvedic formulations against common livestock problems such as ecto-parasitic infestation, endoparasites, papillomatosis, mastitis, etc. 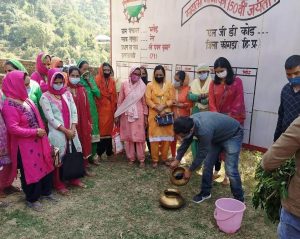 Timeline for setting up a community fodder ban

Table 3. Timeline for setting up a CFB 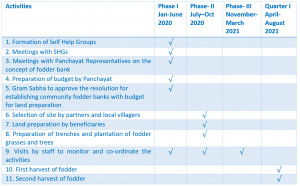 Cost of a community fodder bank under the convergence approach

Table 4 depicts the average cost for setting up of fodder banks under the current interventions. Under the convergence approach out of a total of Rs. 1,18,700, the maximum amount has been utilised through MNREGA (Rs 59,420) which ultimately profited the beneficiary families of the village in the form of wage employment. The money from NABARD and Himmothan was utilised for fencing of the area with contribution from SHG member beneficiaries. The cost of fodder roots was not included as roots were readily available with IGFRI Palampur, and CSKHPKV Palampur, under their technology transfer programme. Therefore, at a meagre cost of Rs 1,19,000 (approx.), one fodder bank was established in each of the four village Panchayats. 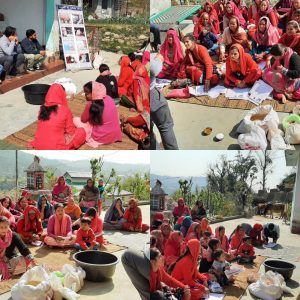 One of the main reason for our success has been the partnership that we developed among the following actors.

Setting up of Community Fodder Banks

The estimated fodder production has been 738.9 quintals. Out of this 193.54 has been of superior fodder varieties of Setaria, Napier Bajra and Super Napier. Of the remaining, 545.36 quintals have been the local grass variety. Production is expected to increase in coming years.

The participation of communities involving women SHGs and farmers during each stage of the project has given them an insight into techniques of wasteland management, fodder production and preservation along with scientific animal feeding. The main reported challenge has been in encouraging the beneficiaries to adopt aftercare practices such as weed management, fertilisation/manuring of the community fodder banks. In one of the fodder banks weed growth had been observed which required aftercare. Though the farmers were made aware, yet, aftercare has remained a challenge. One of the proposed solutions has been to demarcate the sub areas for each member for aftercare. In one village area the work on land plantation had to be abandoned due to local level politics. 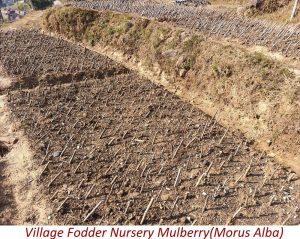 Non-availability of sufficient fodder trees has remained a severe constraint as there is lack of fodder nurseries in the area. Department of Forests, Govt. of HP is the sole provider and its priority has been to meet its own targets. Secondly, very few fodder species, like Orchid Tree (Bauhinia Variegate) are available, but important fodder species such as Bhimal (Grewia optiva), Bamboo (Dendrocalamus strictus), and White Locust Tree (Robinea pseudoacacia) are not easily available.  As a solution the project has established two nurseries of fodder grasses and trees which will provide planting material in the next year.

Community participation has been reasonably good in the community fodder initiatives and capacity building programmes. Women folk from nearby villages have also been participating in the meetings and training programmes. In some instances neighbouring Gram Panchayats are willing to establish such fodder banks through support of COVAS CSKHPKV Palampur and Himmothan Society. There is a plan to extend the fodder bank activities in the next two years and more farm women of neighbouring villages will benefit.

The authors would like to acknowledge the financial support extended by the National Bank of Agricultural and Rural Development, (NABARD), Shimla, HP, India.