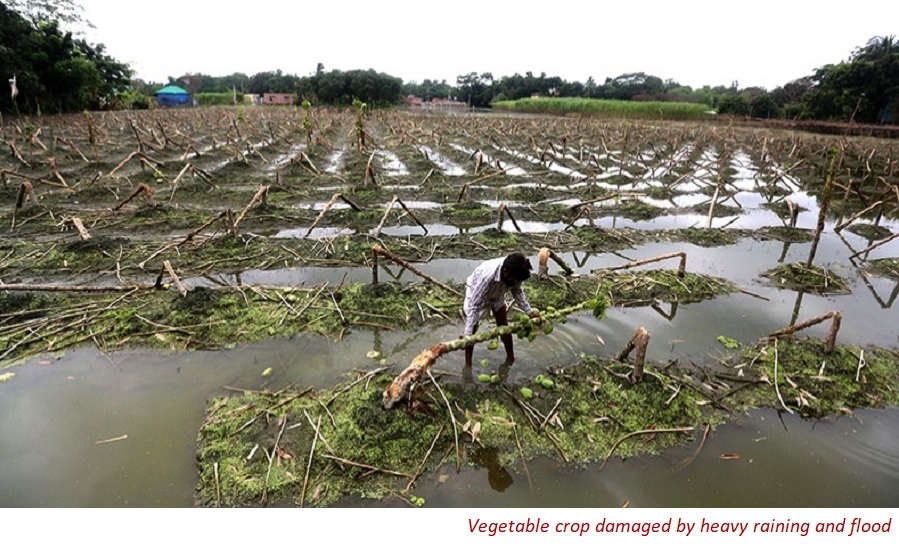 Sack gardening is a solution to both the lack of arable land as well as the lack of available space for gardening. It allows the more vulnerable households in flood prone areas of northern Bangladesh to grow vegetables, especially in the case of those who lack then capacity to purchase vegetables. This can help them diversify their diet, and also save on the purchase of vegetables, while practicing an activity that is simple and brings them overall well-being. Md Mamunur Rashid, Md. Hafizur Rahman and Md. Ashraful Alam narrate their experiences in promoting sack gardening here.

Northern Bangladesh is affected by floods of varying intensity almost every year causing substantial environmental and ecological losses as well as the loss of lives/assets. In recent years, four to five flooding spells have occurred in most of the char areas and its inundation period was prolonged. As a result, a huge amount of field crops and homestead vegetables are damaged and farmers have lost both food and money. In 2020, three phases of floods damaged standing crops on 42,055 hectares of land causing production losses of 1,49,416 tons of crops worth Taka 499.16 crore in Rangpur agriculture region (BSS 2 November 2020). So, production and supply of vegetables across the country was disrupted and the prices of vegetables shot up steeply. The poor people who depend on homestead vegetables are struggling to fulfill their family’s nutritional requirements, particularly during flooding period. Therefore, sack gardening at the homestead level could be an effective and better option to produce vegetables during the monsoon season.

Sack gardening is a solution to both the lack of arable land and the lack of space that usually happens during flooding. It allows the more vulnerable households to grow vegetables that they would otherwise struggle to purchase, and thus diversify their diet, and help them save on vegetable purchase, while practicing an activity that brings them good health. The process and approach of sack gardening is described in Box 1.

Sack gardening was introduced in the villages of Teesta River Basin where RDRS (Box 2) is implementing REE-CALL 2021 project with the support of Oxfam in Bangladesh. In 2018,a total of 20 demonstration plots were established in seven flood prone villages of Kaunia Upazila of Rangpur distirct where villagers have been experiencing severe flooding every year and facing difficulties in growing vegetables in the monsoon period in cropland and homestead areas. 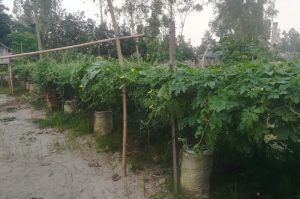 Initially 20 women farmers were selected from 17 groups and each farmer prepared five bags in April/May to grow mostly creeping/climbers and herbaceous vegetables that could be harvested from June onward; and was enough to meet their family requirements as well as provide extra income through sale in markets.

In 2019, totally 60 demonstrations (including 20 from the previous year) were established in 20 villages where the average number of bags/family was six. After fulfilling the family’s needs in monsoon period, the additional vegetables were sold and the average earning was Tk. 4,000. 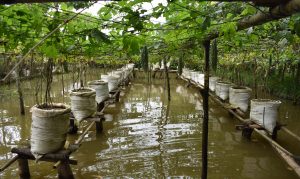 In 2020, around 400 farmers of 30 villages of Kaunia Upazila established sack gardening. All the farmers in 2020 got good harvest despite catastrophic flooding due to which traditional farmers again lost vegetables and failed to meet their family’s needs.

We organized a Field Day to share the sack gardening method and its results with other farmers whose homestead vegetable cultivation was damaged every year by floods. On this occasion, representatives of DAE, NGOs, and farmer organizations attended. Furthermore, we organized exchange visits among the group members for increasing cross learning which helps in further replications.

Promotion by the Department of Agricultural Extension (DAE)

In 2021, around one thousand farmers from 35 villages of Kaunia Upazila have taken the initiative to establish sack gardening with support from the project and also DAE. The adoption of sack gardening in areas where DAE is promoting this is very impressive.

Replication in other projects

Keeping in view the success of this initiative, the RDRS has started replicating sack gardening in other projects. One case in point is from the SONGO (Sustained Opportunities for Nutrition Governance) project funded by EU, where sack gardening is being implemented in six Upazilas of Kurigram and Gaibandha, by RDRS and ICCO cooperation as a climate resilient agricultural practice in flood prone areas.

In 2020, 162 demonstrations were established under SONGO in 18 Unions of six Upazilas and the output was remarkable. Based on its success, this year around one thousand farmers have adopted sack gardening with the support of the project and DAE. Similarly in 2021, another project called ‘Trans-boundary Flood Resilience in South Asia’ funded by Evangelical Lutheran Church in America (ELCA) has introduced sack gardening and established 216 demonstrations in 24 flood prone unions of Kurigram and Lalmonirhat districts. 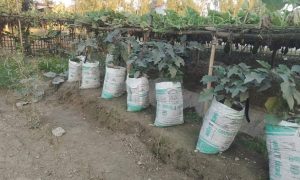 A group-based extension approach was introduced for the implementation of sack gardening which was helpful for finding appropriate farmers to establish the initial demonstrations properly by following the correct procedure. The results from demonstration plots were impressive and these were promoted through Field Day and exchange visit where interested farmers from other communities participated.

The project team was experienced and worked very closely with the field level government staff of DAE which was useful to mobilize farmers for further extension.

The project faced some of the challenges mentioned below and these were addressed by taking several measures. For instance, when level of flood water rose due to unexpected heavy rainfall, the families found a safe place for moving the sacks. Bag or sack or pot might be washed away due to strong water current during flooding and so measures were taken in advance to protect them. To avoid damage to the plants from cattle or goats, additional protective measures were also taken.

Appropriate variety of vegetables seeds were selected in consultation with farmers in the project area, and also by engaging with extension agents. As germination of seeds could be affected, additional seeds were procured from different sources in advance.

Vegetables play a crucial role in ensuring food and nutritional security. In Bangladesh most of the vegetables are cultivated in the rabi season (October to February, the main vegetable growing season) and kharif-1 (March to June) season. In monsoon season (July to September), the vegetable supply in the market is very limited due to lack of appropriate technologies for growing vegetables amid frequent occurrence of natural calamities and other climatic hazards– making it unavailable to the climate vulnerable poor communities in Bangladesh. Sack gardening technology, therefore, could be an effective and better option to produce vegetables during monsoon; eventually it is a good system for vegetable production in winter also. This is contributing greatly to reducing malnutrition by making nutrient rich vegetables available throughout the year. This technology could be treated as a women-friendly technology due to its feasibility in homestead areas. So, it could also be replicated in the coastal, haor and other climate prone areas of the country.

The authors are with the RDRS, Bangladesh.