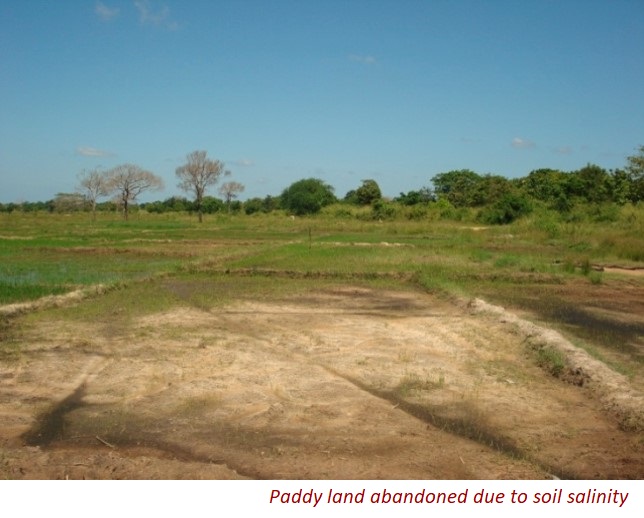 One of the major constraints that limits the expansion of cultivated area and restricts productivity increase in agricultural fields in Sri Lanka is abiotic stress. Many factors contribute to abiotic stress in agricultural fields. Soil salinity or accumulation of soluble salt, iron toxicity, soil acidity, and low fertility are some of these factors. The area affected by coastal salinity is estimated to be around 112,000 ha during the 1970s. In addition, approximately 4000 ha of coastal rice soils in Sri Lanka were flooded with salt water in 2004 due to the tsunami that struck it. The area affected by coastal salinity has not been estimated in recent times. A study conducted by Sirisena and team (2013) in Puttalam district has revealed that 50% of the 24,000 ha of cultivable paddy lands have become non-cultivable due to soil salinity.

Intrusion of sea water into inland areas causes coastal salinity. Sea water intrudes into inland areas in many ways. Occurrence of tides and dikes is the major reason for intrusion of sea water into inland areas. In the coastal areas, rice farmers experience tidal waves ranging between 45 cm and 60 cm during spring tide and between 10 cm and 25 cm during neap. This brings considerable amount of salts into agricultural fields in the coastal areas. In addition, during dry weather, salt water intrudes into lands up to 50 cm above mean sea level. As a result, rice growing soils in the coastal belt of Sri Lanka are salinized every year making rice growing difficult. 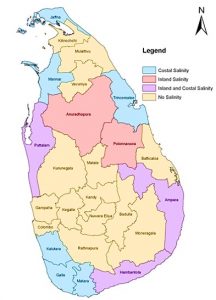 Sea water intrusion by surface flow or seepage may render soils of the coastal areas saline. Removal of sand from river beds for construction work and reduction of water levels in rivers due to dry weather cause sea water to enter into rivers, and use of this salty water for irrigation purposes also increases the salt content in agricultural lands. Blockage of drainage canals (to increase cultivated area and for unauthorized water use) also adds to the problem by preventing draining of salts, leading to accumulation of salts in even larger quantities.

Accumulation of salts in the soil profile

The degree of salinization in areas depends on climate, tidal regimes, and processes of streams entering the coastal plains. Salt accumulation and severity of salinity increases in the drier climate and decreases greatly in an equatorial climate without the presence of a pronounced dry season (Moorman and Van Breedman 1978).

Several research studies provide ample evidence that accumulation of salt in the paddy fields in both inland major irrigation areas as well as coastal areas is taking place currently. Accordingly, most of the paddy fields in the major irrigation scheme in the dry zone of Sri Lanka are vulnerable to salt accumulation. Sirisena and team (2010 and 2008) revealed that CO3 and HCO3 ions of Ca, Mg and Na are the prominent anions found in inland salinity areas. So more and more agricultural lands will become saline in the time to come due to unwise use of irrigation water in inland paddy fields. In addition, escalating temperature and higher evaporation could lead to increase in the area under salinity.

Productivity of rice crop decreases significantly due to dehydration, nutrient imbalance, and pollen sterility.  Scientists have observed significant crop losses due to soil salinity in paddy fields. As such, unproductiveness of the land due to high level of salinity is one of the significant causes for the reduced production and productivity of paddy lands in Sri Lanka. In many parts of the country farmers continue to cultivate saline affected lands without taking adequate/appropriate measures, and that will cause further financial losses. 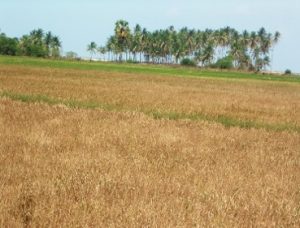 Crop damages due to soil salinity

Use of rice varieties which can withstand saline conditions is the most important option to improve rice production in salty paddy fields. Some salt tolerant rice varieties have the ability to accumulate high salt contents in their cells without damaging tissues. It has been observed that Pokkali variety has an ability to accumulate sodium (Na) salts in their vacuole that can reduce salt toxicity. Some rice varieties have the capacity to reduce effects of salt through dilution effect by producing higher biomass, while varieties like Nonabokra have the ability to absorb essential plant nutrients by excluding toxic nutrients. Therefore, introduction of high yielding, salt tolerant rice varieties is the most suitable and effective alternative that can improve rice production in the saline paddy fields of Sri Lanka.

Pokkali and Nonabokra were the two traditional salt tolerant rice varieties available in Sri Lanka since the 1940s.  As these two varieties are tall and produce lower grain yield, actions were taken at the Ambalatnota Rice Research Station during the 1980s to produce salt tolerant high yielding dwarf rice varieties (e.g., At 354 and At 401) using the genetic background of Pokkali (see photo below).  In 2010 another two salt tolerant dwarf and high yielding rice varieties (Bg 369 and Bg 310) were developed at the Rice Research and Development Institute at Batalagoda using genetic background of Nonabokra and Pokkali.  As such, Pokkali, Nonabokra, At 354, At 401, Bg 310 and Bg 369 are salt tolerant rice varieties adapted to Sri Lankan conditions. According to the results reported by Sirisena et al. (2010) the highest yield (7.5 t ha-1) under salt affected conditions was recorded from the new rice variety Bg 369, followed by Bg 310 (7.0 t ha-1). 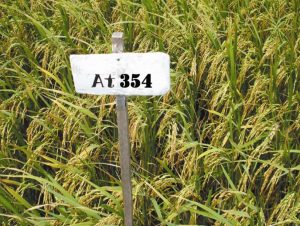 At 354, a salt tolerant rice variety developed in Sri Lanka

Illegal sand mining across the riverine areas may cause alarming intrusion of sea water into the land during droughts. The existing government laws and policies are not enough to control illegal sand mining. Development of alternative construction technology and manufacture of alternative sources of sands for construction are critically needed to reduce the negative impacts of river sand mining in vulnerable areas. Professional support should be given by government to go for alternative technologies, such as use of quartzite and quarry dust as sand substitutes.

One of the major reasons for salt water intrusion into paddy lands is the damage of saltwater restraining bunds. Such bunds should be prepared wherever possible in the vulnerable areas and have to be constantly repaired in areas where such bunds are damaged.

Insufficient irrigation water especially in the yala season leads to high salt contamination. In addition, during the dry season evaporation is high leading to increased salt concentration on the top layers of the soil profile. Therefore, proper maintenance of water distribution structures and increasing the efficiency of water usage are critical to avert salinity-related problems.  Use of other field crops, which have lower water requirement during yala seasons is important so as to reduce soil salinization and improve land productivity.

Appropriate groundwater development together with management policies and guidelines to regulate groundwater extraction in order to ensure environmental friendly and sustainable use of groundwater are urgently needed. Regular monitoring of electrical conductivity of well water is necessary before using them for cultivation.

Salt contamination is dependent upon the prevailing weather conditions and paddy lands are extremely sensitive to climate change. Therefore, cultivation seasons should be decided based on the weather conditions in the district.  Weather conditions during the last five years can be considered for this decision making. Utilization of new technologies, such as geographic information systems (GIS) and remote sensing systems to identify the salt accumulated in fields, is also necessary to introduce best management practices.

IMPLICATIONS FOR EXTENSION AND ADVISORY SERVICES

Extension and Advisory Services (EAS) can play a very important role in educating farmers on ways of addressing the issue of soil salinity and promoting best practices to address the challenges arising out of increasing soil salinity. It is the general experience of EAS that motivating farmers to adopt technologies that have long term sustainable impacts is not that easy. Both farmers and EAS are often attracted to those technologies that can demonstrate short-term financial benefits. During the last 15 years, the government implemented programmes that provide a substantial subsidy for fertilizers for paddy cultivation. This has brought significant benefits, but increased the tendency of farmers to place lower emphasis on the essential soil management practices that are critical to maintain agricultural sustainability in the long run.

Even though there are traditional and improved technologies available for the adoption of agro ecological farming that promotes sustainable agricultural practices, the conventional extension approaches adopted by the EAS providers are still based on group and mass extension methods, which are more suitable for the promotion of farming methods having short term benefits at the expense of long term disadvantages. As discussed in this paper, soil salinity is becoming a serious issue critically threatening paddy cultivation in affected areas. Therefore, EAS need to adopt new EAS interventions for such areas. This would involve adopting group methods, such as Farmer Field Schools, and individual methods such as frequent meetings with farmers in the affected region to provide field-based problem solving advisories relevant to each farmer.

The dearth of EAS providers in the food crop sector and the lack of adaptive research to support extension professionals should be addressed without delay. Extension personnel may lack the knack of persuading the farmers to adopt much-needed sustainable farming methods. A proper capacity needs assessment must be done to identify the gaps in their functional capacities.  There is also an urgent need to have policies that incentivize farmers to adopt better soil and water management practices.

Dharmakeethi RS. 1990. Investigation of salinity in soils and water of the Kirindi Oya irrigation and settlement project. Report submitted in partial fulfillment of the requirement of the degree of Bachelor of Science in Agriculture, University of Peradeniya, Sri Lanka.

Dr W A D P Wanigasundera retired from the University of Peradeniya as Professor Agricultural Extension in 2019. Before that he served as the Head of Advisory and Extension Division of Tea Research Institute (TRI) Sri Lanka. He is the Honorary President, Treasurer, and Executive Committee member of the Network of Extension and Advisory Services in Sri Lanka (NAEASSL) and represents NAEASSL in the Governance Board of AESA (Email: wanigasundera@gmail.com) 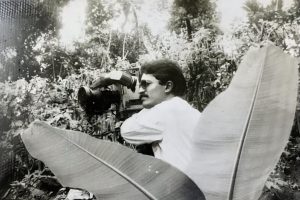 Blog 163-Doordarshan among the Farmers 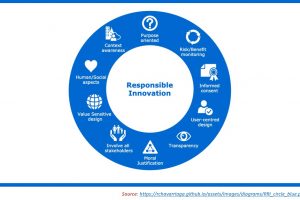 Blog 162-Towards Responsible Innovation in Agriculture: The Way Forward 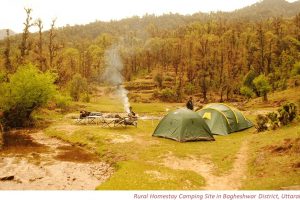 Blog 166-Adoption of Sustainable Land Management (SLM) to Halt Salinization in Bangladesh Coastal Region
Blog 164-Taking Soils For Granted: How Over-Exploitation of This Non-Renewable Resource Poses a Grave Threat to Our Future
Comment