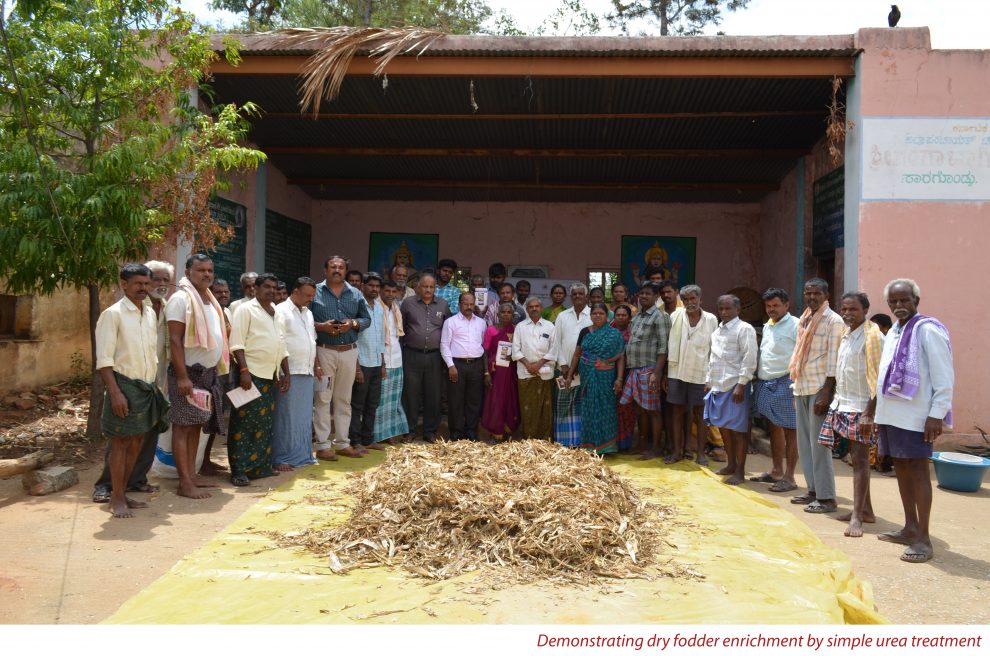 Though Karnataka contributes substantially to the total milk, meat and egg production in India, productivity and income from livestock farming can be further increased. To achieve this, extension and advisory services need to assist farmers in accessing cost-effective and relevant technologies and related services. In this context, the College of Veterinary Sciences, Hebbal (functioning under the umbrella of Karnataka Veterinary, Animal and Fisheries Sciences University, Bidar) participated in the implementation of  Bhoosamruddhi project entitled “Research and Extension Activities for Livestock Development in Chikkaballapur District, Karnataka” during the year 2019-20. This project is funded by ICRISAT and it organised a range of capacity development programmes for farmers and field veterinarians. These are discussed in this good practice note.

This project had extended its services and inputs to four villages selected from two Talukas, Gowribidanur and Shidlagatta, in Chikkaballpur District based on livestock population and as per the meetings and discussions held with officers of State Animal Husbandry department. Its interventions directly benefited approximately 620 farm families.

Dry fodder enrichment: Crop residues a major source of roughage available to farmers for feeding livestock (>70%). An animal should consume optimum level of dry matter and fibre to perform and yield normally. In the project area, the major dry fodder source was ragi and jowar straw. It was observed that more than 50 percent of the farmers fed only dry fodder during summer. Dry fodder, such as crop residue, needs to be stored and utilized properly. All the respondents in the project area stored the dry fodder in the form of hay stock on their farms. Dry fodder wastage is mainly because of not chaffing before feeding. Hardly 30 percent of the farmers chaff dry fodder before feeding livestock.

In order to educate about the importance of dry fodder and maximize its utilization, chaffing and its advantages were demonstrated in eight areas. Urea treatment and ammoniation techniques using maize stover, sorghum (jowar) stover, paddy straw and ragi straw were taught. Storage structures, plastic drums, silo bags and plastic sheets could be used to store the enriched dry fodder. The details of the procedure to be followed were demonstrated using 25 kg chaffed maize stover. Urea used was 500 gram (2%) dissolved in 10 liter water. The enriched fodder was given to the animals. Also, some part of it was stored in plastic sheets, making it air tight. After 21 days, the animals were fed ammoniated fodder. Enrichment of crop residues by urea treatment/urea ammonification can increase intake of dry fodder, balance nutrient supply, improve digestibility and sustain the performance of livestock at minimal cost.

Concentrate supplement preparation: A balanced ration feed is essential for livestock. In the project area, the animals were mostly fed monocot grasses. Green maize was major annual fodder crop along with Napier grass, and Sesbania, the major dicot fodder. Feeding green fodder only during the lush green season was noticed. During the summer, animals were maintained mostly by feeding dry fodder along with tree fodder viz., Sesbania, Neem, Melia dubia, Subabul, Moringa, etc. only farmers with irrigation could grow green fodder during summer. None of the farmers were aware of balanced feed preparation and its utilities. 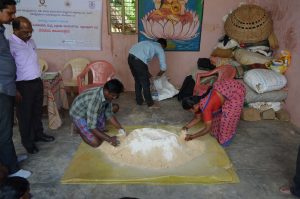 Silage making by using silo bags: During the summer or off season, green fodder availability is scanty. In such situations, silage serves as an alternate source of livestock fodder. To maintain the health and productivity of animals, daily feeding of both green and dry fodder is recommended. But, owing to lack of irrigation facilities and other factors, many farmers in arid regions depend on dry fodder during the summer. This in turn leads to poor performance of animals. In recent times, silo bags of different capacities became locally available. These can be utilized even by small and marginal farmers with a small investment.

All the respondents in the project area were making green fodder available either by cultivating in their fields, through grazing or by purchasing it. Maize, sorghum and Napier grass were the fodder varieties grown in project area along with fodder trees like Sesbania, Neem, Moringa, Melia dubia, etc. During times of excess production, fodder from maize and sorghum was harvested, dried and stored as heaps/hay stocks. This exposed lack of awareness of preservation methods like silage preparation, haylage preparation, etc. Hence, silo bags of capacity 750 kg were distributed to the identified beneficiaries under the project. Eight demonstrations on their use was also carried out. Green fodder such as maize, jowar and Napier were used by different farmers to prepare silage using silo bags. 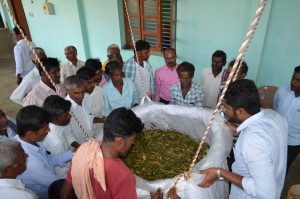 Demonstration on Silage preparation through Silo bags at Saragondlu

B. Artificial Insemination in Sheep and Goat

Sheep and goat rearing has been a part of farming families for centuries. There is a large scope for increasing meat and production of other livestock products. A baseline survey in the project area showed that the sheep and goat population was 1,861 out of which 1,604 were sheep and 257 goats.

Elite ram and bucks introduction was one of the measures to improve the genetic potential of sheep and goats. Artificial insemination (AI) in sheep and goat is taking wings in rural areas. Farmers can opt for elite rams/bucks semen. This technology would help farmers overcome inbreeding depression in flocks. 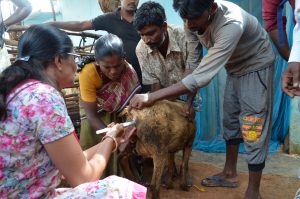 AI in sheep and goats was proposed in four villages of the project area. Before inseminating, the animals were screened for pregnancy. Non-pregnant ones were selected and subjected to additional concentrate feeding along with deworming. After 21 days, the animals were inseminated with elite ram/buck semen. Conception rate of 50%  has been obtained. The skill of carrying out artificial insemination in small ruminants was imparted to veterinarians in the area where AI was being implemented.

The objectives of Bhoosamrudhi Project and action plan were discussed with the officers. Veterinary officers working at different places of Gowribidanur taluk and Shidlaghatta taluk were given training in field technologies such as mobile applications for dairy and fodder production (Dairy Kannada and Fodder Kannada), animal nutrition and feeding aspects and use of non-conventional feeds in livestock production, artificial insemination in sheep and goat and other technologies to reduce cost of production. Artificial insemination was demonstrated and the officers gathered hands-on experience at field level.

Non availability of fodder seeds and root slips, water scarcity, unawareness of improved fodder varieties, labour scarcity, dependency on agricultural and commercial crops, avoiding cultivation of fodder varieties were some of the challenges experienced by farmers in the study area.

In order to address these issues, four fodder nurseries were established in four villages of the project area. Fodder varieties including monocot, dicot along with fodder trees were introduced in these nurseries. These nurseries would become a good source of fodder seeds/root slips/stem cuttings for other interested dairy farmers in and around the villages in the future. The importance of feeding leguminous and non-leguminous fodder mixture was also conveyed to the farmers. 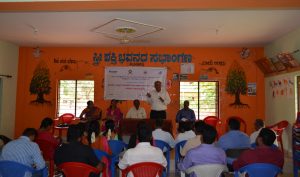 In order to create awareness and educate farmers about improved varieties of fodder, field day was conducted in a field by involving farmers from a few villages. Importance of green fodder viz., monocots, dicots and tree species was explained to the farmers. To expose farmers to different varieties of fodder and to educate them about cultivation, harvesting, processing, preservation, feeding quantity, etc. field visits were organized with subject matter specialists. Farmers expressed interest in cultivating the varieties the seeds/root slips/stem cuttings of which they saw in the fodder nursery.

Animal health and fertility camps were organized in three villages of the project area, two at Gowribidanur taluk and one at Shidlaghatta taluk. The camps gave the farmers an opportunity get their sick animals treated. The teaching faculty along with PG, Ph.D. students and internees provided animal health services in the camp. In the three camps conducted, more than 350 large animals and small ruminants were treated. Around 600 sheep and goat along with larger animals were dewormed. 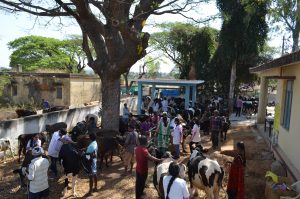 Farmers acquired the skill of silage making in silo bags, intensive cultivation of fodder, balanced feed preparation and enrichment of dry fodder. Fodder nurseries established during the project are a source for root slips and fodder seeds. Veterinarians acquired the skill of doing Artificial Insemination in sheep and goats. Covid pandemic prevented follow-up visits to farms. However, telephonic conversations confirmed the continuation of fodder nurseries and silage preparation using silo bags. This initiative provided our B.VSc students exposure to ground realities of village life and farming, and hands-on experience of organizing animal health camps. It also helped them in improving their communication skills.

The authors gratefully acknowledge the funding agency, ICRISAT, Hyderabad, and sincerely thank the Vice Chancellor, KVAFSU, Bidar, for taking active part in extension activities and providing dynamic inspiration. We thank our Director of Research and Dean, Veterinary College, for providing their support and necessary facilities to conduct this project work. The authors are thankful to all the veterinarians and farmers in the project area for their cooperation and for sharing their valuable views in the study. 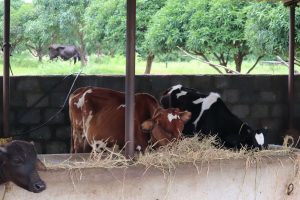