Extension officials in Kerala are playing a proactive role in linking farmers to markets during the current lockdown. In this field note, T Dileepkumar narrates the experience of using WhatsApp to link vegetable producers to markets.

From January 2020, the Kerala State Department of Agriculture Development and Farmers’ Welfare (DADFW) initiated a programme for cultivating vegetables and fruits in all homesteads and other available cultivable areas in public and private institutions. As articulated by the Honorable Minister for Agriculture, Kerala, Adv. VS Sunil Kumar, the vision of the department was to achieve self-sufficiency in the State for safe-to-eat vegetables and fruits. This year Ernakulam district considerably increased the area and production of fruits through cluster-based targeting (Box 1) so as to meet the enhanced demand for vegetables and fruits during Easter, Vishu (an important festival of the State), and Ramzan – all falling in the months of April and May. To promote vegetable cultivation, another project was also implemented by the DADFW wherein institutions, including NGOs, were granted assistance (based on the existing rates of cost of cultivation and project guidelines) to take up vegetable cultivation in the premises of public and private institutions. 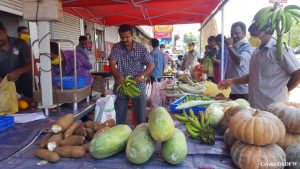 Farmers as well as the common man wholeheartedly embraced the programme, and by March 2020, the foliage of vegetables was seen thriving in many homesteads and roof tops/terraces. However, when vegetables and fruits reached the harvest stage, challenges emerged in marketing these products due to the nation-wide unprecedented lockdown due to COVID-19. While some households are happy that this initiative helped them to have their own safe-to-eat vegetables harvested from their own backyards, those growing vegetables commercially found marketing these perishable commodities a great challenge. 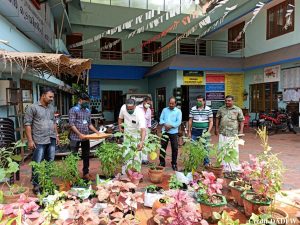 In Ernakulam district, the farmers have adjusted their cropping cycle so that they could harvest and sell these vegetables and fruits at a good price during the festive season in April-May. The major fruit crop of the district with GI tag, the Vazhakulam pineapple, is harvested during the summer months of March-May. The main vegetables grown during this time include cowpea, cucumber, amaranth, okra, bitter gourd, ashgourd and snakegourd, etc. The lockdown devastated the expectations and hopes of the growers as they failed to harvest, transport and find markets for their produce. At the same time, the people in the urban areas faced problems arising from the unavailability of quality products for their daily use. The growers were afraid that their produce might rot and go waste due to the prevailing lockdown, which would then make them bankrupt.

Ernakulam district, located in Central Kerala, is the commercial capital of the State and includes the largest metropolitan region of the State, that is Greater Cochin. As per the 2011 Census 31.93 percent of the district’s population live in rural areas and 68.07 percent live in the urban region. This clearly shows the need for ensuring that the food supply chain stays intact in the district. 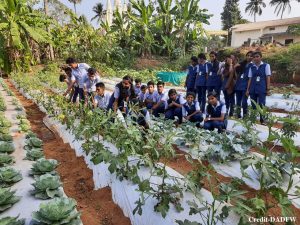 Students cultivating in schools with assistance from Krishibhavan

The DADFW has presence in all Gram Panchayats, Municipalities, and Corporations in the State in the form of Krishi Bhavans which are headed by an Agricultural Officer and 2-3 Agricultural Assistants. The department has already set up marketing facilities for farmers to sell their produce through Ecoshops, cluster markets, agro service centers, and farmers’ markets.

To help farmers during the lockdown, the State Government directed its officers to strengthen all the markets aided by the government and start farmers’ retail outlets in all Krishi Bhavans with minimum arrangements, so that farmers can sell their produce. As per this direction, the existing markets were strengthened and 38 new Farmers’ Retail Outlets (FRO) were set up as Jeevani Sanjeevani Markets in the Krishi Bhavan premises. Even though all the markets started functioning, product movement did not happen as expected.

During the first week of lockdown, farmers could dispose their produce in the nearby areas.  But as the days passed, the situation changed as farmers failed to sell their produce in the nearby areas. These problems were shared by growers through newspapers, television channels, and also through social media. In response to these constraints experienced by farmers, the Director of Agriculture instructed the department officials to intervene in the issue and explore social media options to connect farmers, traders and consumers. By that time, the Ministry of Home Affairs (Government of India) had issued orders for relaxation in lockdown guidelines with respect to transportation of farm produce and logistics connected to transport of farm inputs and outputs. Based on these guidelines, the Director of Agriculture asked the district functionaries of the department to make urgent interventions in the marketing of fruits and vegetables. 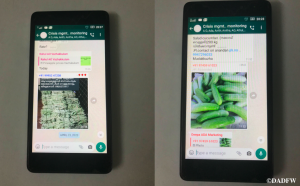 Whatsapp post by farmers sharing the produce ready for sale

Subsequently, WhatsApp groups were formed for farmers and traders in all blocks who have more areas under vegetable cultivation, so as to notify that marketable surplus was available at the block level. The traders can directly contact the farmers and collect the produce from the farm itself in the lockdown period.  At the same time, if the product is required in a residential area, the Ecoshops or agro service having vehicles can supply farm fresh products to these residential areas and apartments – on request.  If the product surplus cannot be cleared within the district, the same can be shared with the groups of other districts and the produce sold in other districts, based on demand.

As days passed the system started showing excellent results. Formation of groups in all the blocks enhanced farmers’ access to more buyers and more markets (Table 1). Almost all farmers started to post the details of the surplus they have along with the image of the produce and their contact number, and these were shared with all other groups so as to generate orders from residential associations and traders. The trader or the consumer can directly contact the producer and take produce on mutually agreeable prices after considering the base price fixed for that day.

** Based on formal data available through Ecoshops, agro-service centres, etc. Data is not available for sales that has happened directly between the producers and traders and housing societies. 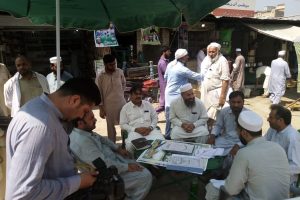 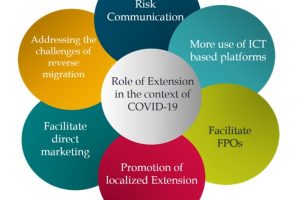