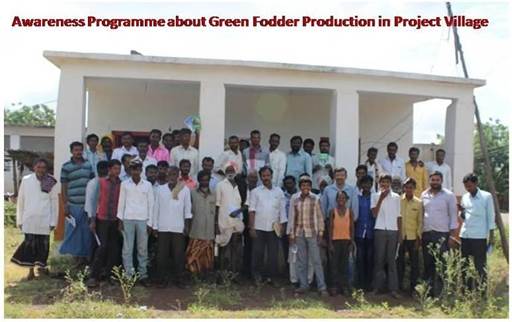 The establishment of fodder nursery and distribution of fodder seeds/root slips among the farming community through integrated and participatory extension approaches is essential for dairy development. Dr Prakashkumar Rathod, Dr Vivek Patil, Dr Channappagouda Biradar, Dr Anant Rao Desai and Mr Dattu Reddy share    their    experiences     of fodder nursery establishment and             promotion       of             fodder production       under   Sujala-III project implementation in Karnataka (India).
CONTEXT
Among the various issues to be addressed in the Indian dairy sector, fodder production and feeding has been a critical element for improved production and productivity. Over the years, although various attempts have been made to promote fodder production

at field conditions, there has been a poor response from the farmers for fodder cultivation and feeding which might be due to major constraints like lack of awareness and inputs, pressure on land for cultivation of food/commercial crops, poor socio-economic status of the farmers, shrinking of common property resources etc. Further, the attitude and knowledge level of the dairy farmers also plays a pivotal role in adoption of recommended animal husbandry practices including green fodder cultivation and feeding.

It should be noted that livestock producers meet their fodder requirements through a combination of crop residues, grazing (on common lands, private lands, forests, fallow agricultural lands and harvested agricultural lands) and cultivated forage crops (mostly by large landholders), while some of them purchase fodder. However, there is an acute shortage of green and dry fodder and lack of scientific information in the farming community about fodder production. In this context, various initiatives have been undertaken by multifarious agencies (public, private, NGOs etc.) for promoting green fodder production and distribution of fodder seeds/root slips at institutional and farmers’ levels. These agencies are also involved in establishing fodder seed production farms and fodder nurseries to support the production and availability of improved fodder seeds. These farms also serve as demonstration and training units for fodder production and promotion. The seeds/root slips of native species, which have a higher chance of surviving, are distributed at a nominal rate among the farmers to encourage fodder production. On similar lines, various research and extension projects have focused on establishment of fodder nursery and distribution of fodder seeds/root slips among the farming community through integrated and participatory extension approaches for dairy development.

The good practices discussed in this note are from the project villages of the World Bank-funded, Karnataka Watershed Development Department (KWDP)-sponsored Sujala-III project. This project has been implemented by the Veterinary College, Bidar which is under the aegis of the Karnataka Veterinary, Animal and Fisheries Sciences University (KVAFSU), Bidar (Karnataka) during last two years viz. 2015-16 and 2016-17. The development objectives of Sujala-III project is to demonstrate more effective watershed management through greater integration of programmes related to rainfed agriculture, innovative and science-based approaches and strengthen institutions and their capacities with the involvement of  individual farmers and member farmers of producer organisations (for example: Karnataka Milk federation, private milk societies etc.). We undertook a study on this initiative mainly to understand the process and impact of this initiative