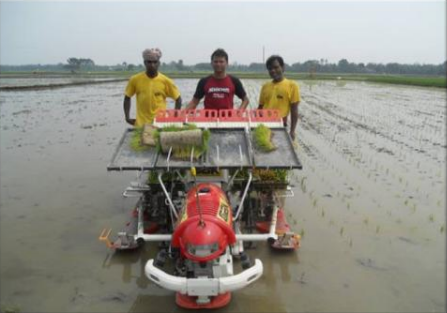 Rice is the staple food of about 160 million people of Bangladesh. It provides nearly 48% of rural employment, about two-third of total calorie supply and about one-half of the total protein intakes of an average person in the country. Rice sector contributes one-half of the agricultural GDP and one-sixth of the national income in Bangladesh. Almost all of the 17 million farm families of the country grow rice. Rice is grown in about 10.5 million hectares (ha) of land which remains unchanged over the past three decades.
A field demonstration of machine transplanter during T. Aman 2012 in Rajshahi district

For successful rice cultivation, availability of quality seeds and seedlings, land preparation, transplanting seedlings in optimum time (with uniform spacing) are important. These are timeconsuming and expensive as labour cost accounts the biggest input for rice production. Though land is mostly prepared mechanically, raising of seedlings and transplanting are still being done manually in Bangladesh.

To produce rice from a hectare of land, about 156 person days are required. Of these 45 person days are needed for raising seedlings and transplanting which is about 29% of the total labour required. Though a contract system for undertaking transplanting evolved during this period, the careless attitude of contract labourers (aggressive pulling of seedlings from the nursery, clipping seedlings and transplanting at more depth with insufficient plant density, etc) to complete the work in the shortest possible time has been affecting the productivity of rice in Bangladesh. Though the work standards have been declining, these contract labourers have started demanding higher wages every year.

Considering these issues, the Agriculture and Food Security Programme of BRAC and GBK (Golden Barn Kingdom) had taken a collaborative programme     on        machine transplanting of rice to disseminate this technology, with the following objectives:

Box 2: Agriculture and Food Security Programme (AFSP) of BRAC and GBK
AFSP is trying to enhance food security and reduce hunger and malnutrition through promotion of environmentally sustainable agricultural production system. Besides agricultural research, development and marketing, the programme is also disseminating agricultural technologies through farmers’ participatory large scale block demonstration. The programme’s objectives are to engage in adaptive research in addressing emerging challenges in the agricultural sector, promoting higher production through cost effective and sustainable technologies, providing quality inputs and innovative financial and marketing services.
Golden Barn Kingdom Pvt. Ltd (GBK) is an agro input based multinational company that has made its debut in mechanized agriculture to boost rice production in Bangladesh. With this vision, the company has introduced the globally recognized ‘tray method’ in rice plantation to plant sapling through machines in the country’s rice fields.

Survey and selection of participants:To introduce the new technology in farmers’ field, BRAC’S technical assistance team made a survey at the very beginning of the           planting           season.            The             following criteria were used for the final selection:

Field supervision by BRAC’s Agronomist in Rajshahi district in