A social experiment by Extension Officers of the Kerala State Department of Agriculture and Farmers’ Welfare changed the fate of pineapple farmers who were bracing for a huge financial loss arising from the COVID-19-imposed lockdown in the State. In this Field Note, Philipgi T Kanatt and Jony Jos narrate how this small pilot was conceived and implemented, and how it got upscaled across the State.

Amidst the New Year celebrations of 2020 news flashes on Corona virus at Wuhan, China, started trickling in. It snowballed into a pandemic at a rapid pace, forcing governments to declare lockdowns. Normal life and activities in Kerala came to an abrupt stand still from 21 March 2020. Farmers became panic-stricken as it coincided with the main harvest season of paddy, vegetables and fruits. Farmers work long and hard to finally reach harvest time, which is the culmination of all their farming activities. These activities were planned and executed well ahead of the lockdown, and long before the emergence of COVID-19. Crops require a long gestation period from seed to harvest. As such the impact of the sudden lockdown left the farmers thunderstruck.

The State departments promptly rolled out crisis management plans. Crisis management groups were formed in each district, with the block level assistant directors and agricultural officers roped into social media groups – to facilitate sharing information of a glut in this situation and for dynamic decision making. Government-owned market intervention agencies, such as the Vegetable and Fruit Promotion Council, Keralam (VFPCK), and Horticorp, started aggressive procurement of fruits and vegetables. 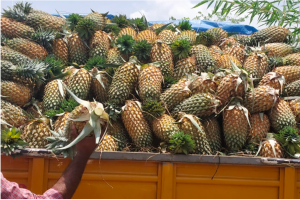 Pineapple is one of the major fruit crops in the midlands of Kerala, with farmers leasing out large areas of land to cultivate it. The best pineapples are harvested in the summer months prior to the rains. Vazhakulam near Muvattupuzha in Ernakulam district of Kerala, is well known for cultivation of the GI tagged variety of pineapple (‘Vazhakulam’ was registered as Geographical Indication No. 130 & 141 at Chennai during 2009-2010 under Goods – Agricultural category). On average 500 tonnes of pineapple were sent to various cities across India as well as overseas on a daily basis.

Convoys of trucks usually wait at Vazhakulam market to be loaded with mature (but still green pineapples), so that they reach as ripe fruits in distant markets. This also prevents them from getting damaged when stacked one above the other. Then, when the country got locked down and the State borders closed, the movement of pineapples got stalled. The fruits which were not harvested started getting ripe on the plant, which led to an alarming situation as the farmers were left with just a ‘now or never’ option. Farm gate price of Pineapple plummeted to Rs. 5 per kg in the auction markets. Farmers, our food suppliers and the guardian angels of our environment, are on the verge of extinction. Their survival is imperative to our food self-sufficiency as well as the management of our ecology. The paradox is that while farmers are facing a glut there is scarcity at the consumer end. It was time to experiment with innovative ideas in order to effectively bridge these gaps to develop a viable producer-consumer linkage. 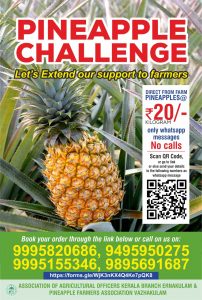 This is where the district branch of the Association of Agricultural Officers – Kerala (AOAOK) decided to intervene in the market with a social experiment. A rough estimate revealed that more than 500 tonnes of pineapples would get spoiled in one week. The procurement mechanism alone could not meet the sudden surge in supply, so there was a need to create a matching demand if the impending glut had to be avoided. A tele-conference of the office bearers and a few members, who were familiar with the pineapple growing and trading regions, was called. The conference was held in a structured manner where in-depth discussion on each stage of procurement, logistics and marketing were done and documented. On its basis a proposal was submitted to the District Crisis Management Committee for their approval.

On receiving a favourable reply from the District Crisis Management Committee, a virtual war room was set up. A select group of volunteering officers were split into different teams, with clear and well-defined functions and responsibilities. Data handling, logistics management, setting up of a customer feedback helpline, etc., were assigned to separate teams. Online platforms were created with input forms for collection of online orders. Social media posters were designed incorporating hyperlink and QR codes of order forms and widely circulated through the various groups and contacts of the members. A press release exhorting urban consumers to come out in support of the farmers, including a set of telephone numbers of the helpdesk, were widely published in the print media. Another group was entrusted with compiling easy pineapple recipes to be circulated among customers.

The Pineapple Farmers’ Association (PFA), a group of enterprising farmers based in Vazhakulam, agreed to join the intervention plan – Pineapple Challenge. Minimum order quantity for each order was fixed as 100 kg at a rate of Rs. 20 per kg for premium grade (weighing not less than 1.250 kg per fruit) pineapple. The rates were intentionally kept lower than the local retail prices so as to spur demand by encouraging consumers to buy in bulk, which was the only way to suck up the market surplus. Logistics, distribution protocols, and sanitary measures that were to be followed were clearly laid out to PFA. Figure 1 illustrates how the entire operation was organized. Payment was on Cash on delivery mode directly to the farmer group. The transportation and distribution charges were borne by the farmers. 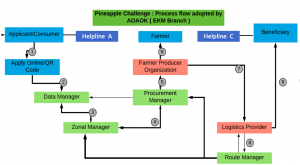 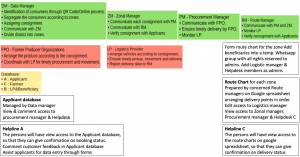 The media coverage drew overwhelming response. Within a span of two days, 376 applicants confirmed their requirements. All of them were residents’ associations, with an average of 35 members. A total of ten days of active duty – involving 22 staff volunteers, 55 farmers and 25 freight vehicles – was super hectic. As a result 56 tonnes of pineapples were supplied benefitting 7500 people living in and around Ernakulam city. All safety measures to prevent the spread of Corona virus during harvesting, loading, and logistics was carried out by the Pineapple Growers’ Association.

Pineapple loaded onto the truck and unloaded at a housing society

Customers who were provided with a soft copy of pineapple recipes were motivated to produce different products. Pineapple recipes (in pdf file) shared via WhatsApp and Gmail had a positive impact. Home scale production not only ensured a safe product but also provided a learning experience and creative family time. One of the feedbacks read: “Initially we ordered 100 kgs. We were surprised to get a soft copy containing 18 pineapple recipes. Added to that the assurance of straight from farm and it`s freshness encouraged us to double the order while pineapples were delivered.” Another feedback describes their first time experience in preparation of jam, kesari, etc., and that too with the joint effort of all family members. Such experiments have instilled confidence in preparing various dishes at homes rather than depending on packed products from shops. The order and supply details are in Table 1. 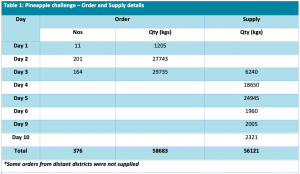 Orders were received from essential services establishments that were functioning during the lockdown. In an empathetic move, they gifted employees with pineapples. AOAOK was successful in arranging two mega processors and four women SHG micro units for pineapple procurement and value addition. This entire intervention, which began from 5th April 2020, has brought about a radical change. Meetings, consultations, discussions and debates were all online. A digital system for identifying beneficiaries, collecting and transmitting basic information were utilised effectively. Farmer Producer Organisation was empowered to handle issues pertaining to farmer identification, pineapple aggregation, arranging logistics, and swift delivery.

Thus Digital Agricultural Extension proved successful when right material was delivered to right person at the right time. We were able to create a valuable and reliable database that is easily retrievable. The success of the intervention prompted Agriculture Department officials of other districts too to come up with a Pineapple Challenge in their respective districts. As a result of this entire intervention, market prices recovered to Rs. 15/kg; and once interstate movement was reinstated, the pineapple market could be steered away from certain disaster.

Overall, the impact of the social experiment by the fraternity of agricultural officers, helped to provide much needed social support to farmers. Generally farmers are not seen as a part of the social fabric, so consumers are less sensitive to their conditions. This campaign helped to highlight the vulnerability of farmers, which led many customers to join the Pineapple Challenge and extend their support to them. It is high time our society acknowledges farmers – not only as our food providers, but also as the guardian angels of our ecology. 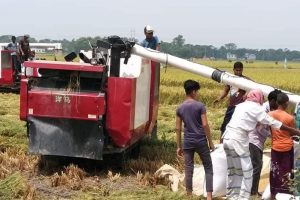 Blog 127- COVID-19 Impact on Farmers in Bangladesh: Findings from the BAEN Survey

Field Notes 10- Harvest your Vegetables at a KVK Farm

Blog 117-COVID-19: How EAS can support Livestock and Poultry Farmers during Lockdown
Blog 116-Extension and Advisory Services amid COVID-19: Efforts of KVKs in Rajasthan, Haryana and Delhi
Comment