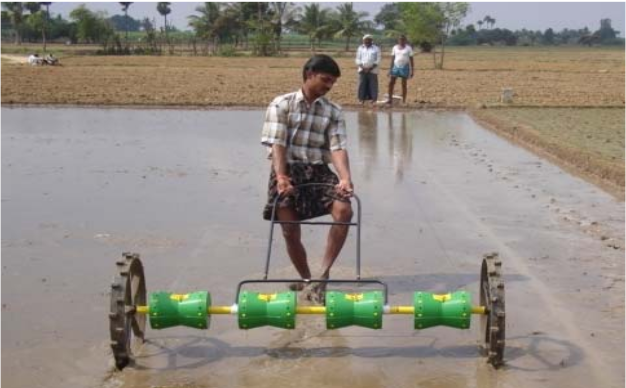 Increasing cost of inputs (especially irrigation water and labour) and unavailability of labor for critical farm operations have made rice cultivation extremely difficult for farmers in several areas of Andhra Pradesh which is a major rice growing state in India.  To address these issues and to provide an alternative option to traditional system and ‘SRI’ method of rice cultivation, the Krishi Vigyan Kendra, Chittoor introduced direct seeding method in rice using a fibre bodied 8 row drum‐seeder for the first time in 2006.  This led to considerable reduction in cultivation costs and the area under direct seeding using drum‐seeder increased from 0.2 ha in
2006 to more than 4600 ha in 2012. P. Bala Hussain Reddy, S Sreenivasulu and C Manohar from KVK Chittoor share their experiences with promotion of this technology in this Good Practice Note.
CONTEXT
Over the past few years, labour shortages have been crippling rice farming in Chittoor district of Andhra Pradesh. Implementation of employment guarantee scheme by the Government and reluctance of youth to engage in farm operations have created an imbalance in the supply and demand for labour. Though a contract system for undertaking transplanting, weeding and harvesting evolved during this period, the careless attitude of contract labourers (aggressive pulling of seedlings from the nursery resulting in root damage and transplanting at more depth) to complete the work in the shortest possible time impacted the productivity of rice. Apart from the inconsistency in work done and work force engaged, the contract labourers have been asking for more wages. Though the introduction of SRI (System of Rice Intensification) helped in saving water, seeds and realizing better yields, high labour requirement for transplanting and weeding have constrained wider adoptability of SRI. In response to these practical problems faced by the farmers the KVK Chittoor introduced direct seeding method in rice using a fibre bodied eight row  for the first time during rabi 2006.

Krishi Vigyan Kendra, Chittoor  was established in 1992 under the functional management of RASS

(Rashtriya Seva Samithi) formerly known as Rayalseema Seva Samithi  which is a reputed NonGovernmental Organization operating in Andhra Pradesh, Orissa and  Tamil Nadu.  The activities of the KVK are funded by the Indian Council of Agricultural Research (ICAR).

The KVK has 15 staff out of which six are subject specialists in Agronomy, Pathology, Horticulture, Agricultural  Extension, Sericulture and Home Science.  As envisaged by the ICAR, technology assessment and refinement is the primary function of RASS‐KVK followed by generation of production data through front line demonstrations. Vocational training courses for the unemployed rural youth and capacity building programmes for the extension functionaries are the other important activities of KVK.

In direct seeding method of rice cultivation, need for a nursery and tasks such as pulling, transporting and transplanting seedlings are avoided as the pre‐germinated seeds are directly sown using a  in a well puddled and leveled wet field. The seed is dropped in rows @ 20 cm row to row spacing and the seed rate is about 25 – 37.5 kg / ha.

The drum‐seeder is made of fibre material and hence requires low pulling force to operate. It allows one person to sow one hectare in 5‐6 hours compared to three to four days of transplanting by 30‐ 40

The need for hand weeding is reduced by the use of pre‐emergence weedicides coupled with use of a modified cono‐weeder in between the rows.

If for any cause application of herbicides is not possible initially, post emergence weedicides like Cyhalofop butyl or Bis pyribac sodium may be applied at 15‐30 days after sowing.  The rice seeds that are directly sown into the field need moist field conditions and flooded conditions are avoided till panicle initiation stage. Till the panicle initiation stage, intermittent irrigation is followed by irrigating the field every 2 to 3 days depending on the physical properties of the soil.

From panicle initiation stage, flooded conditions are followed similar to that in transplanted rice before irrigation is stopped 10 days before harvest. Direct seeding is helpful due to less labour and time requirement, low cost of cultivation due to skipping of nursery raising and transplanting, maintaining recommended plant population and also due to early crop maturity by 7 ‐10 days.

In Direct seeding method the cost of cultivation is reduced by about Rs.10000 ‐ 14000 per ha as the operations like nursery field preparation, rising nursery, nursery pulling and manual transplanting as done in traditional transplanting method are skipped off (Table1). Resource efficient principles like low seed rate, intermittent drying of the field, low water requirement, reduced requirement of manual labour, improved productivity due to wider spacing of 20 cms between rows and reduced crop duration by 7‐10 days.

Based on the positive results from the initial trials, the KVK began promoting this technology across the district. On realizing the merits of this technology more farmers started using this approach and the area under drum‐seeder technology expanded from 0.2 ha in one mandal in Rabi 2006 to 4621 ha spread over 46 mandals of Chittoor District by Rabi 2012.