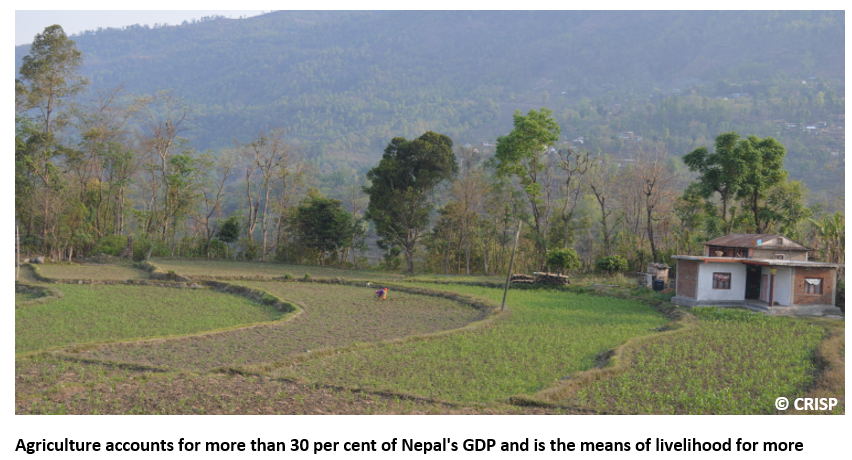 Nepal’s agricultural extension service delivery system is currently at the crossroads as it tries to adjust to the changing institutional and policy context imposed by the new federal structure.  In this blog post Kamal Devkota and Dhanej Thapa discuss some of these challenges and its implications for strengthening extension delivery in Nepal.

The new Constitution of Nepal 2015 has initiated federal, provincial and local governments in Nepal, each bestowed with respective rights, responsibilities and power. The erstwhile development regions, zones, municipalities and village development committees have been dismantled to form seven provinces and 753 local government units. The number of districts has increased from 75 to 77, with the division of Nawarparasi and Rukum districts. However, the districts remain administratively the same but with significant curtailment in power and authority. Along with this administrative restructuring, the governing mechanism has been changed as well. While developing the new mechanism of governance, the Constitution has given tremendous authority and responsibility to local governments, which is unprecedented and has never been experienced before in the history of Nepal.

After federalism came into operation, elections for this three-tier government were held successfully in 2017 with overwhelming participation from the people and the elected representatives have assumed their roles with huge excitement, renewed commitment and enthusiasm. At the same time, there are increased expectations from the general public, especially in terms of easy service delivery, infrastructure development, economic wellbeing, and local prosperity. Expectations on service delivery for agricultural development, which is considered as an engine of economic growth, is relatively higher.

Agricultural development relies heavily on an effective agriculture extension system. Nepal’s agricultural extension system used to have a strong bureaucratic chain with high vertical accountability but less to farmers. But federalization has opened up an opportunity for making agricultural policies at the province and local government level and thus rise above bureaucratic control. This changing context has also brought in multiple challenges while achieving agricultural development goals envisioned in Agriculture Development Strategy 2015. This blog highlights the emerging issues and challenges in the changing institutional and policy context. It also briefly traces the gaps in the current extension model and discusses those issues where efforts should focus – to design a better agricultural extension service system in Nepal.

The initiatives with regard to implementation of federalism have already started with the restructuring of institutions at national, district, and local levels. The apex body for agriculture development, the Ministry of Agriculture and Livestock Development (MOAD), has been split and then merged time and time again. Currently, the Federal Ministry of Agriculture and Livestock Development (MOAD), is comprised of three central departments, central laboratories, and   commodity development centers, along with national priority projects such as the Prime Minister Agriculture Modernization Project (PMAMP). 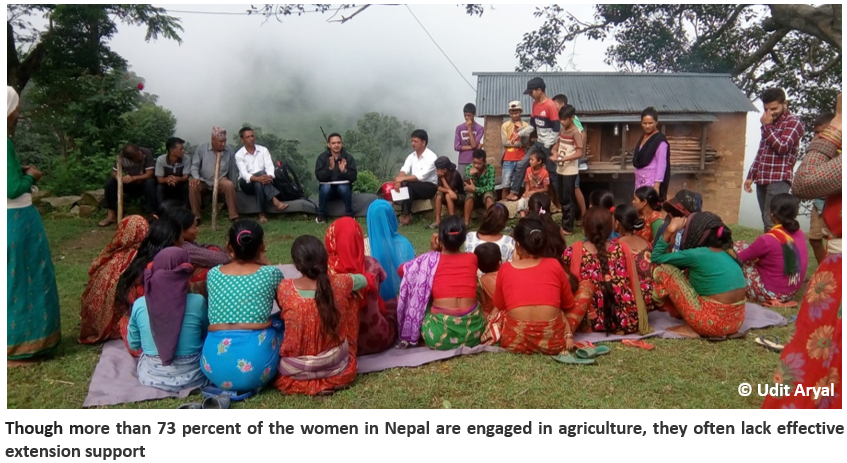 At the province level, the Ministry of Land Management, Agriculture and Cooperative has been established. This ministry operates agriculture and livestock development-related Directorates, province-level laboratories, Agriculture Knowledge Centre, Veterinary Hospital and Livestock Expert Centers at the district level.

Agriculture and Livestock Learning Centers were recently formed in the district by replacing the District Agriculture Development Office (DADO) and District Livestock Service Office (DLSO). As per the new constitution, district level sectoral organizations including DADO and DLSO, were supposed to transfer into the local government offices. It was expected that farmers can get expert services within their villages. But these district offices remain within the district under different names and slightly changed mandates and authorities.

At the local level, a few agriculture staff members have been assigned to deliver agricultural services under local government. In each local government, there are separate sections for agriculture, livestock, and fisheries development. However, these sections lack adequate staff to cater to the needs of a large number of farming households. Apart from this, the extension agents working in those sections have limited technical expertise, with poor linkage mechanisms to provincial-level agriculture development offices.  Thus, it seems that the ongoing practices of institutional restructuring of agricultural services in federal system is inconsistent with the spirit of the constitution, which envisages delivery of quick, quality and adequate services to people at the local level. Hence, Nepalese agriculture extension service delivery has been facing difficulties in transforming itself in the changed context.

Article 51 of the Constitution of Nepal established the policies on agriculture and land reform. It aims at scientific land reform by ending dual ownership of land, and promoting the rights and interests of farmers. It has prioritized the preferential right of the local community to protect, promote, and make environment friendly and sustainable use of natural resources available in the country. Similarly, the constitution has guaranteed the right of farmers to have access to lands for agricultural activities, select and protect local seeds and biodiversity that have been used and pursued traditionally, in accordance with law. The ultimate objective is to enhance production and productivity. For the implementation of these provisions, clear roles, responsibilities, power, and authority at different levels of government is needed.

However, agriculture has been under the concurrent right of all levels of government – federal, provincial, and local. Agriculture and livestock has been allocated under the authority of provincial government whereas local governments are responsible for agriculture and animal husbandry, agro-products management, animal health, and cooperatives. Farmers can take services from all three tiers of the government. There is no clear demarcation as regards the power, authority, roles and responsibilities among the different levels of government. Currently restructured agriculture entities are operating under short-term working guidelines and are yet to be finalized vis-à-vis their terms of reference so as to avoid duplications of programmes and services. This has created confusion on mandates and sharing of authority. Quite likely there are deficiencies and duplications in the programs.

People’s expectations from the newly elected representatives with regard to development and provision of services is high, and the elected officials have already been feeling intense pressure. However, newly established institutions not only lack experience and expertise on agriculture service delivery, they also experience shortages of human resources with the necessary technical expertise. Agriculture extension officers are not willing to go to the local government offices and offer their services as they do not see better career opportunities and financial incentives. There is a general tendency to stay within the central or provincial offices and bypass the local government offices. Hence, the numbers of extension agents deputed to these local governments are far less than the required number for quality service delivery.

This has created multiple challenges in extension service delivery at the local level. For instance, Pokhara metropolitan city allocated more than one million dollars during the  last fiscal year for the agriculture sector, however, more than half of the budget remained unspent due to the limited human resources available to mobilize the fund. If a metropolitan city like Pokhara is facing such a human resource crisis, what about rural municipalities?  They face even more challenges in offering extension services. Hence it must be said that the limited human resources available at the local government level have been impeding the expected agriculture extension service delivery in the changed context.

Agriculture Development Strategy (ADS) 2015 is the main guiding document that presents the overall strategy, including action plan and roadmap, for the agricultural sector in Nepal. It was prepared under top-down planning of the earlier administrative structure with the assumptions of the central control and coordination system. It was supposed to support the implementation of the Local Self-Governance Act of 1999, which has since been replaced by the Local Government Operation Act 2017.

This strategy was formulated and harmonized in keeping with the principles of decentralization, local self-governance, and participatory planning and is most likely to remain valid in the future. However, the federal governance structure was not envisaged in the strategy. After the execution of the federal democratic structure, ADS 2015 seems paralyzed. Several provisions of ADS need to be amended in the new administrative structure. For instance, the strategy perceived DADO and DLSO based in districts as the key extension service providers and provisioned their capacity building mechanism in the strategy. However, the DADO and DLSO both are not in operation now.  With the dismantling of DADOs and DLSOs, responsibilities of agriculture services delivery has congregated under local agriculture units at municipalities and rural municipalities, which are not as envisioned in the ADS. There are many such features affected by the federal structure.

With federalism coming into operation and the state having been restructured, agricultural institutional restructuring needs to be in line with the new state mechanism. Given that the constitution has greatly empowered local governments with power and authority, the agricultural institutional structure at local levels also need to be made equally powerful with sufficient human and financial resources. These restructured institutions need to have clear mandates, power, and authority so that they can make their respective plans and programs avoiding confusion and duplication. A clear incentive plan for extension workers may motivate them to go to the local government offices and provide their services to the farmers. These may include career and financial incentives, exposure, further study plans, social security, etc. Similarly, a bridging policy provision for ADS in the new federal context could be useful for linking with new structures. 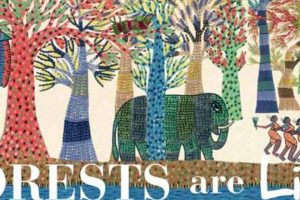 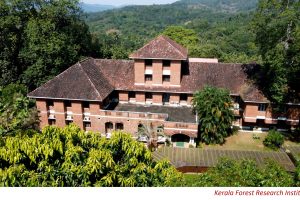 Blog 143- Extending Forestry Research in the Tropics: The KFRI Experience 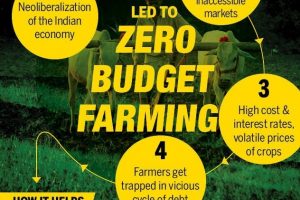 Blog 142-Zero Budget Natural Farming- is it Scientific and Sustainable?